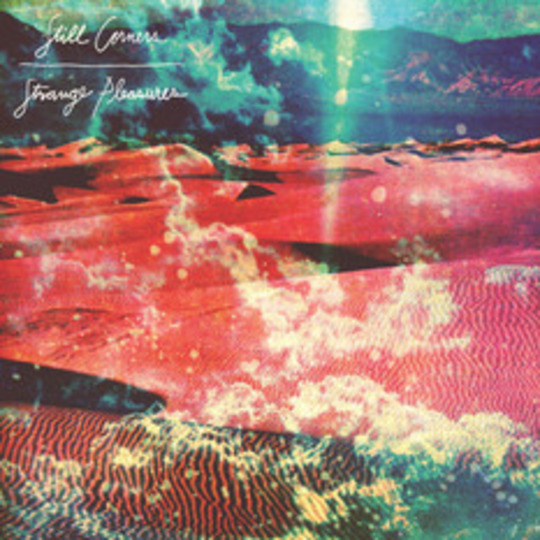 When Still Corners' first long player Creatures Of An Hour landed two years ago, it stood out like a belisha beacon above an ensemble of post-xx wannabes. Ethereal in places yet delicately poised as a whole, its Cocteaus-meets-Broadcast loveliness highlighted the band's core duo of Greg Hughes and Tessa Murray as a force to be reckoned with in the future.

Since then, obligatory tours and festival appearances aside, it's been a quiet 18 months for Still Corners. Not that Hughes and Murray have been resting on their laurels. Instead, the duo have been busily fashioning the follow-up to Creatures..., and more importantly, achieved something of a reinvention along the way. Not that Still Corners ever were about fitting comfortably into any pigeonholed genre or scene. However, on first inspection, Strange Pleasures is a different beast entirely to its predecessor entirely. Murray's vocal apart, it's barely recognisable from what those familiar with Creatures... had come to expect.

Although hardly one dimensional, it would have been so much easier for Still Corners to continue along the same tried and trusted path. So it's to Hughes and Murray's credit that their voyage of discovery that takes in Germanic style looped song structures, Eighties synthpop and even hedonistic disco has paid handsome dividends.

Setting the scene impeccably on opener 'The Trip', a sprawling six minutes long opus that takes in swirling synthesizers, gently orchestrated strings and watery atmospherics along the way. Whatever 'The Trip' songwriter-in-chief Hughes is referring to may be, Hughes coos "This keeps us alive" before the song dissolves in a heady mix of enclaved sounds and processed beats.

Perhaps the most obvious - and definitely recent - point of reference for Strange Pleasures lies with Brooklyn's Chairlift and in particular their second record Something. 'Beginning To Blue' and 'Future Age' in particular occupy the same breathing space while throwing Fleetwood Mac basslines (Tango In The Night rather than Rumours) and spectres of Carly Simon's 'Why' into the mix at random intervals. 'Midnight Drive' also doffs its cap in the direction of messrs McVie, Buckingham, Nicks and co. while showing earnest pretenders like Haim how constructing elegant pop with a succulent twist should really be done.

Better still is the indigenous electro pop of 'Berlin Lovers'. Coming on like a mash-up between first album Ladytron and Blondie during their disco phase without singularly resembling either, it heralds a new found confidence with the duo that wouldn't sound out of place on the dancefloor of a busy club. 'Beatcity' - perhaps a dead giveaway thanks to its title - also takes residence by the DJ booth, albeit from a hazier, blissful perspective.

While the haunting reverb-laden 'All I Know' represents the only three minutes on Strange Pleasures that echo its predecessor - Murray's vocal reminiscent of The Passions' Barbara Gogan or Selebrities' Maria Usbeck, particularly on the chorus ("It's a fire, it's desire"), it fits seamlessly into Strange Pleasures ambitiously bold statement of intent. There's little here that disappoints, and while that wheel might keep on turning 360 degrees south, it isn't for the want of trying on Still Corners' behalf.

A welcome, and ultimately pleasurable return.