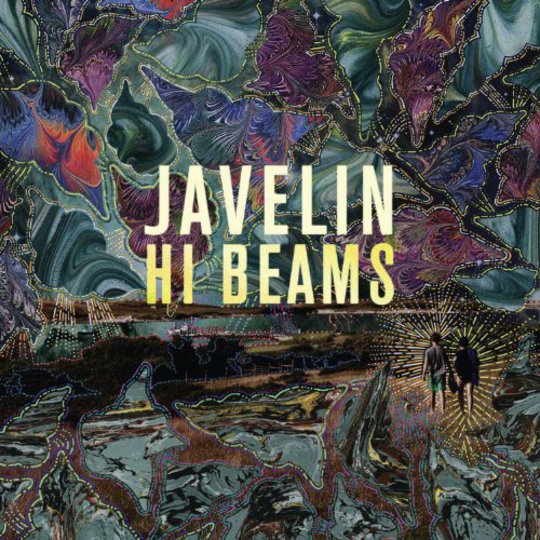 The distant 'ping' of the sonar that resonates through the opening bars of lead single, ’Nnormal', hints at Javelin's searching for something in the darkness, and it's this search which clouds their second album, Hi Beams.

Tom Van Buskirk and George Langford primarily crafted their early work on home computers and almost in credit to this, 2010's debut No Mas feels tangibly infused with the electric shimmer of an LCD screen. Cutting, pasting and looping samples together, they built layers of sound into rich sonic collages that were undeniably unique and certainly never less than intriguing. They followed this with the experimental EP Candy Canyon - released for Record Store Day 2011, it felt like a curveball. A neat trick to side step the pressures of second album syndrome, it was a full length follow up in all but name, taking the conceptual theme of the American West and ditching the sugar coating of No Mas for 13 short tracks of heavily sampled, lo-fi Americana. Something which laid interesting groundwork for what was to come next.

What has come next, in the shape of Hi Beams, is the Brooklyn duo's first foray into a professional studio. =Gone is the curious melange of loops and samples in favour of a far more straightforward electronic, indie-pop noise and the drastic difference that this has made to their sound, for both good and ill, is immediately apparent.

Album opener 'Lights Out' with its falsetto vocals, tight militaristic drum line and sweeping strings, rubs shoulders uncomfortably with the minimalist robo-funk of 'Nnormal'; all hand claps, filtered vocals and poorly sketched nursery rhyme lyrics. While 'Judgement Night', is a bombastic and discordant instrumental, that sounds like the theme from Neverending Story reworked by Journey, but feels like a three minute retreat to the safety of their previous work. These are all songs that should offer interest but fail to find their feet, with this new direction seemingly coming as much of a surprise to Javelin as it does to us, leaving these initial tracks feeling adrift and desperately unassured. Taken in isolation they might flounder less, but side by side they and jar and jostle for competition, proving that if you are going to make a stylistic shift, it has to be done with unflinching confidence, otherwise you're going to struggle.

Thankfully this disjointed, half-hearted attempt at redefinition seems to serve only as a warm up and things start to pick up, albeit slowly with the vibrant opening chords of 'Airfield' and 'Friending'. It's unavoidable to notice that these tracks have more than a distinct ring of Chunk Of Change-era Passion Pit to them, but they still contain enough originality in their thickly layered basslines and saccharine hooks to make them stand out. Although, it's only really in the hazy melodic fug of ’Drumachines', the jittery sun dappled electronica of 'l'Ocean' and the lush harmonies of album closer 'The Stars' that the production reaps its greatest rewards. Catchy loops, shimmering melodies and digital crescendos coalesce to bridge the indie pop/electronica divide that they seem to be striving for, finally giving the album some of the definition it desperately needs.

Hi Beams is an album that delights and baffles in almost equal measures. It wrestles with an electro-fused pop hybrid which requires a sonic confidence, something that contemporaries such as Toro Y Moi have honed, but still seem to elude Javelin. By turning their back on the scattergun cohesion of their sample heavy debut in favour of greater clarity and studio crafted electronic pop, they seem to constantly undercut themselves, counterbalancing every infectious hook with something tediously predictable. Whilst there are a few head-spinning moments which prove that they still remain a talented production team, this is a frustratingly uneven affair, a half boiled curate's egg, that falters early and struggles to recover.