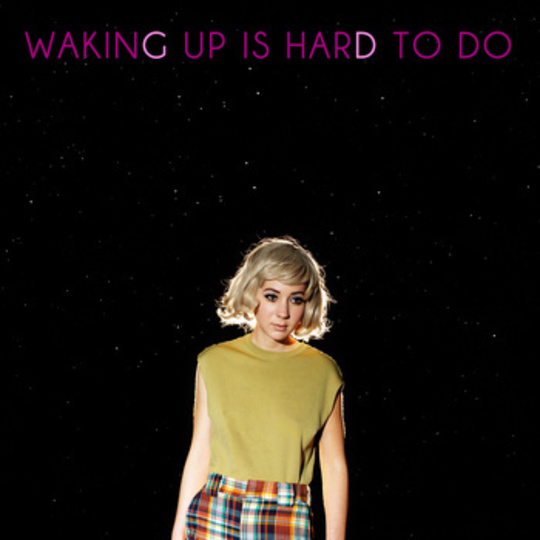 In the seven years since the Giant Drag's cult debut, Hearts and Unicorn , Annie Hardy like - Jesus himself - has been crucified by personal demons, (nearly) died, and been resurrected, all without the fun of chocolate eggs, false idols or bunnies.

Dropped by Interscope in 2007, only a few recordings surfaced from Annie and erstwhile partner in crime Micah Calabrese after their debut: a 2010 EP, worryingly namedSwan Song, followed by a couple of releases on their Bandcamp (the aptly named ‘Twosies’ a digital hybrid of a single and an EP), but apart from a few promises on Annie’s blog there was no sign of that second album. To make matters worse back in 2008 Annie announced that she was suffering from the muscle disorder fibromyalgia, which had left her in 'dull gnarly pain all the time'. Giant Drag, it sadly seemed, were going to be yet another band from the last decade set to meet an untimely demise after showing so much promise.

Well, that was up until 1 March, when it was announced out of nowhere that album number two, Waking Up Is Hard To Do, would finally be released a few days later through Annie’s own new label, Full Psycho Records. And the delay? Annie’s life since their debut has been a self-confessed 'pure hell' with failed record deals, an addiction to prescription drugs and a ‘full psycho' boyfriend. As she summed up on her blog: 'your old pal Annie was nearly kickin’ it with Jesus and the last time I checked that dude lives in Heaven!'

So, it’s a relief that Annie’s life on the shittier end of the stick has thankfully resulted, in some weird act of serendipity, in a record that’s ultimately come out sunny side up. Waking Up Is Hard To Do takes the familial raucous reverb, bittersweet melodies and sardonic wit of the GD’s debut and imbues it with a new sense of clarity, Sixties pop hooks as well as oh some calypso jazz.

Opener ‘90210’ slowly comes into focus in a haze of acoustic guitars that leave Annie’s vocals crystal clear with only minimal distortion used for some well-timed punches. ‘We Like The Weather’ is the first of the syrupy harmonies that fill the album as looped "ooh-las-la"s and jaunty bass dance together innocently towards a full-on fuzz climax. A girl group stomp and military beat powers most of the tracks, most possibly an influence from Annie’s close friendship with The Like; there’s an Andy Williams ‘Can’t Take My Eyes Off Of You’ homage on ‘Garbage Heart’ and the steely determination of the Shangri-Las on ‘Won’t Come Around’.

But Hardy isn’t just reclining in the Spector booth of pop hooks, ‘Messif My Face’ is pure laid back calypso jazz as Annie purrs to picked acoustics, “yeah, this is happening”. ‘Heart Carl’ is slow danced Flying Burritos Bros country blues with Annie imploring, “we all want somebody to reach out and kiss, someone who hardly exists”. Although new avenues are explored the signature, sound that made GD a cult name still remains; notably ‘Firestorm’ has thundering chords colliding with screamed "yeah-a-yeahs!" and ‘Meowch’ is pedal to the floor distortion.

The main draw of the album, however, is that like Daniel Johnston, Eels and Pinkerton-era Weezer Hardy still strikes the golden balance of juxtaposing fear, despair and rejection with sugary pop melodies and a dry near arid sense of humour that sweetens the blow of the heavy subjects at hand making them highly relatable. ‘Sobriety Is A Sobering Experience’ has Annie singing about rehab to jaunty hooks as she croons, “six o clock meds is my favourite taste, strapping me down is for keeping safe” that makes it, darkly, more summer holiday than back to black. And, with titles like this, ‘Dennis The Pennis and ‘Meowch’ Hardy’s tongue is always firmly in her cheek.

‘Meowch’ (recalling the “meows” of ‘Kevin Is Gay’, if that cat was run over) has blood curdling lonely screams of "let me out!" with the same clawed desperation as ‘Stuff To Live For’ from the Swan Song EP. ‘Garbage Heart’ likens splitting-up to throwing out bad trash as Annie bellows, "forgive me I’m not sorry" to plundering guitars only to end on a coy Nelson-esque, ‘hee-hee’. We’ve all been dumped, hit a low and felt lost and sometimes it helps to have a shared voice in the darkness, especially if that voice tries to cheer you up by telling jokes about lays that f*ck like your dad.

Closing with the hopefully prophetic ‘Seen The Light’ Hardy is also closing the chapter on Giant Drag as this is their last album as she leaves the past behind to start her new project, Annie Hardy And The Psychos. Luckily, the closing chapter was well worth the wait.

Crime and the City Solution