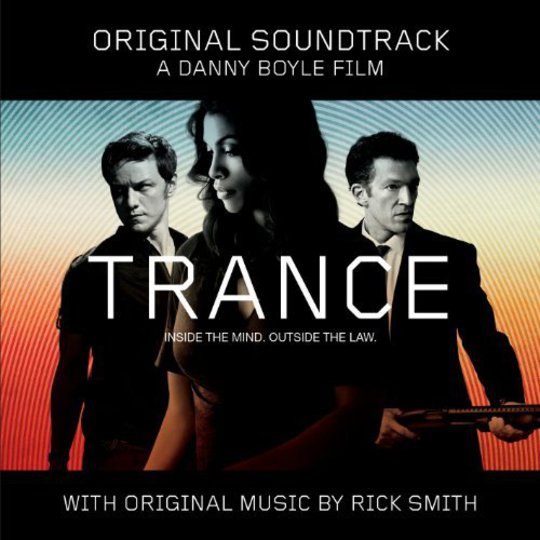 When he was making Trainspotting, Danny Boyle wanted Underworld’s Dubnobasswithmyheadman to soundtrack the entire film. Someone had a word, but it was the start of a relationship with the electronic duo that Boyle would indulge again and again: first in The Beach, then Sunshine, and most famously last year when the band’s keyboardist/producer Rick Smith was handed the sound system at the Olympic opening.

It was Smith who wrote the pumping, 16-minute ‘And I Will Kiss’, adding his own daughter to the choir along with Dame Evelyn Glennie, a hundred nurses and a nationwide cold chill that perfectly fulfilled Boyle’s brief ('frighten people'). Fans of that stirring piece of music will be pleased to hear Smith’s drunk from the same well on Trance, his first film score proper written without partner Karl Hyde (don’t stay apart too long, boys). You want sweeping, spine-tingling melodic techno like you got on July 27? And some M People? You’ve come to the right place.

Boyle’s choice of artists to complement Smith is as eclectic as the director himself, and shows that if you’re going to make a film about amnesia and stolen paintings, you better use music that subverts. The delicious jazz of Art & Dotty Todd’s ‘Chason D’Amour’ makes for a very en français opening, promising trickery and light fingers as that voice purrs ”I adore”. Moby adds pulsing electronic pop from his Destroyed album with ‘The Day’, and the frisky strings of Kirsty McGee’s ‘Sandman’ build the mischief with hissing clarinets and hushed vocals. The biggest surprise is the inclusion of finance ad favourite ‘Movin’ On Up’: one can only hope there’s a cash-counting montage or staff party somewhere in the deleted scenes.

This colourful mix is cemented with Rick Smith’s emotional score, showing the Underworld man’s composition skills are as sharp with an orchestra as they are when producing techno-trance masterpieces. ‘Bullet Cut’ and its twinkling electronica turn into soaring string chords, the kind Boyle would previously have gone to John Murphy for, while ‘Cannon Fall’ throws a spanner in the works with organs, crunching white noise and Rick mumbling. He works his way through the spectrum of score emotions without settling on a single melody, including Dredd-like slabs on ‘You Knew', and a rousing vehicle for Emeli Sandé, whose cry of ”It has been a thousand years since I gave up hoping/Left all my heart and my fears at the bottom of the ocean” has a backdrop of thudding, climbing electronica. Think Orbital’s ‘One Perfect Sunrise’ with the vocals translated into English.

The original tracks confirm Smith as serious currency in the composers’ market, and show how far he’s come since playing keyboards/wearing fur coats in ‘80s art pop band Freur. While each one of his contributions veers towards electronica he has plenty of new ideas, and has produced enough albums to know which ones pump us up and which ones are worth trimming (‘Soho Dim Sum’, with its mix of white noise and acoustic guitars, is put to bed after two minutes). The album might have been sharper if it had been solely his work - would you play Clint Mansell’s Moon score if it came pressed with ‘Walking On Sunshine’? - but the guest tracks here show off Danny Boyle’s eclectic vision, and as usual, Smith answers it in style.