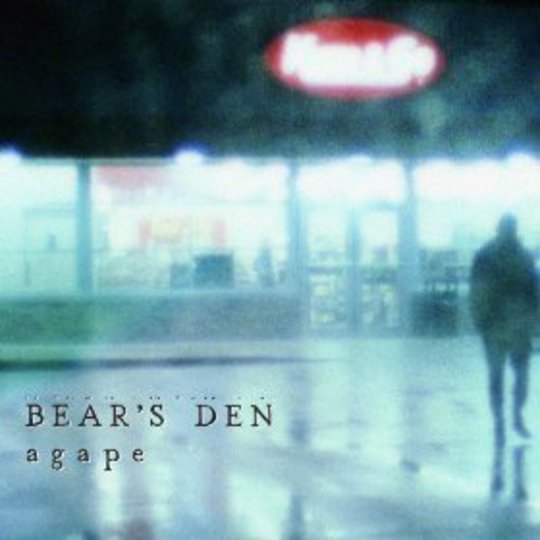 Bear's Den, the London trio made up of Andrew Davie, Kevin Jones and Joey Haynes, have made a quite lovely EP called Agape. I thought we were dealing with a 'mouths wide open in wonder' situation at first, but apparently 'agape' can also mean Christian or, more broadly, spiritual love.

So it makes sense that there is a sense of devotional, and frequently familial, reflection on this record. The opening title track tells of the horror of contemplating life without this 'agape'. It isn't depressing because we're sitting on the safe side of loss with Davie, still possessing what would be so painful to lose; the cheery banjo and sway-inducing beat help too. The chorus lyrics lack any originality and must have been sung a thousand times but, because here they're genuinely part of the message being relayed and not just a space-filler, it doesn't grate.

'Isaac' is the EP's strongest song. You'd think that a three-piece, male, beardy band from London singing folky songs and holding various stringed instruments would struggle to produce something really arresting, but Bear's Den have here. Perhaps it's because the Binding of Isaac isn't really a standard theme; whether the song is sung from the perspective of Abraham, God or a believer is hard to tell, and I can't say I fully understand the song's purpose. But with Davie's nearly too intimate vocal, the band's sensitive, fluid accompaniment and the completely beautiful melody and harmonies, I can live with that.

The next three songs aren't quite up to the standard of the first two. 'Mother' is a mournful, hopeless number about a woman abandoned by her son. The slow, plodding beat sounds like a tired shuffle; the whole track smacks of a deep fatigue and loneliness and doesn't make for easy listening. 'When You Break' gets a bit Nineties emo in places, and the lyric, "Tell me another beautiful lie, tell me everything that I want to hear./ Won't you lay here by my side? I want to f*ck away all my fear" is awkward swearing in a song that doesn't need it. Swearing in songs, particularly songs like these, can easily sour them. 'A Year Ago Today' continues the theme of family loyalty and love. The harmonies are thick and gorgeous, and the plea in the song authentic - the idea of the value of love runs through the record and binds it well.

Generally, it's a lovely EP: well written, well executed and thematically innovative. Sadly, Davie sings like he's half from the West Country and half from Scotland, even though he's from London and talks like he's from London. There is a habit amongst modern folk singers, male and female alike, of developing their own hybrid regional accent to sing in, and it detracts from the authenticity of the music they're making, which is a giant shame. But that's my main gripe, and that says a lot.