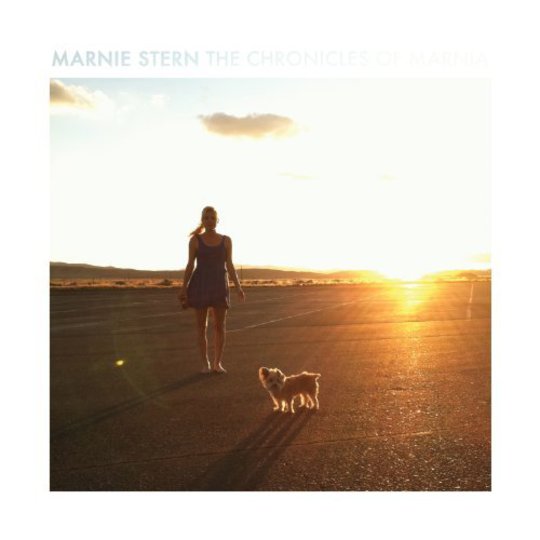 I’d like to be able to separate this record from its context and any other associations. To say something like '...Marnie Stern delivers another set of ferocious guitar-shredding topped with plaintive lyrics in her idiosyncratic vocal style, unhindered by the departure of drummer Zach Hill for controversial rap-trio, Death Grips. Rumours of a shift towards pop should alarm no-one expecting a sell-out, and be greeted with the same enthusiasm as Jandek playing live. By comparatively de-cluttering the arrangements, Marnie just shows us more clearly what a tremendous guitarist she is.' (All of that’s true, even if ‘shredding’ is an empty term; after all, Marnie’s an emotive and expressionistic virtuoso, closer to Tom Verlaine, Steve Howe, or Robert Fripp, who never left you with any doubt what they want you to feel, or picture as you listen.)

The thing is, I’ve been listening to this for a month-or-so, and keep thinking of an interview in which Marnie Stern talked about ploughing on with diminishing returns; making ends meet by teaching guitar to teenagers who need a mentor more than a shot at fame; finding it more expensive to tour; and so on. Plus, I’m remembering an interview for DiS, at the end of 2008. Back then, she’d just released her second (excellent) album, and seemed unlike any professional musician I’d spoken to. Pretty much every single one has been courteous, often witty, and generous with their time, whether or not I was speaking to them on behalf of DiS. A few have been guarded, but not one has punctured any illusions or seemed un-deserving. Marnie had most of the above qualities – and was one of the smartest – but didn’t quite have the same psychic defences. She wanted to talk about how hard it was to make music. "Like really hard", she said, emphatically.

Superficially, the changes from album to album amount to a refinement of the sound; a willingness to use more space, and more rests, to let this or that idea sink in. Having slowed down five per cent, you could imagine The Chronicles of Marnia appealing to anyone who liked Sleater Kinney, or Battles, Dutch Uncles, or even Foals, without having the acquired taste for bands as squirky as Deerhoof or Ponytail. The biggest shift, though, is in the focus of the lyrics. Album #1, In Advance of the Broken Arm was capital-A Art (it’s named for one of Duchamp’s found-objects) and every instrument and vocal part squealed with excitement about having the whole history of art to draw on. The second album, This Is It… took a similar approach to science and science fiction: stepping outside time into a Platonic world of eternal forms, and mesmerising the listener with the bright colours and shapes suggested by those riffs within riffs.

Both albums’ dense lyrics were dotted with self-help slogans and exhortations that Marnie compared to a sports coach. None of this was po-faced – hence the pastiche of the training sequence from Rocky in an early video – but by the time we get to Album #4 an entire song consists of the lines “Don’t you want to be somebody? / Don’t you want to be…?” (‘Noonan’) while another is called ‘Nothing Is Easy’. To be fair, when Marnie sings “what took you so long? they said out loud / got to get obsessed and stay there now” (on ‘You Don’t Turn Down’) the music doesn’t convey defeatism. There’s a moment on the latter when the guitar drops away as if coming to the edge of a cliff, but this is immediately after evoking a sparkling silver sonic plateau. This isn’t lazy songwriting. Every song is full of details – micro-solos – to accent some lyric or other. Halfway through, Marnie seems to remember what it is she wants us to picture – a fantasy world better than this one – but only a couple of songs after the title-track we get this confession:

– delivered in an effect-free voice that’s closer to one of Courtney Love’s forlorn elegies (on Celebrity Skin) than Marnie’s usual pixie-ish style (that Grimes has had more success with). The emotion’s doubly forceful for the use of a hammered piano part. It’s a blunt reminder of what lies behind the impulse to make futurist or escapist music, transforming every sound with effects, before pulling back the curtain, and showing us life when the record stops – much like the final song of the Fever Ray album.

And that’s where the wider context comes in. I guess I'm cathecting a lot here, but Marnie and/or Marnia has come to stand for all the semi-or non-professional musicians I know in their thjrties (and at least one in her sixties), as well as all the teenagers I teach, staring down an uncertain future. There’s no worry that music will stop (even after HMV has gone into administration), but it’s going to get harder to realize the elaborate orchestrations that some musicians do best, and then take them on the road.

An album as loopily titled as The Chronicles of Marnia should be some kind of palliative for the possibly terminal condition of the music industry; a sign that someone is still trying to uphold the ideal that rock can be progressive without fear of mockery, let alone fear of low sales. For a long time, it’s been clear that Marnie Stern has more in common with Joanna Newsom than The Locust, and if she has to be discussed as a female artist then it should be in the same breath as Jenny Hval or Holly Herndon who don’t really have any male peers for what they do.

In time, I’d like to hear this album as an expression of defiance; as a set of songs about getting through tough times, and the decision to go on. I’d like Marnie to be able to do what musicians should and peddle fantasies; continue to dress up for photo-shoots and videos as Rocky, Aladdin Sane, or Jill from (fourth Narnia book) The Silver Chair (assuming that’s the look she was going for…). To do something as absurdly Yes-like as a prog-rock-opera based on Infinite Jest (as the opening track, ‘The Year of Glad’ had me hoping). In short, it’s a sad chapter, but it’s an epic story. Keep reading.