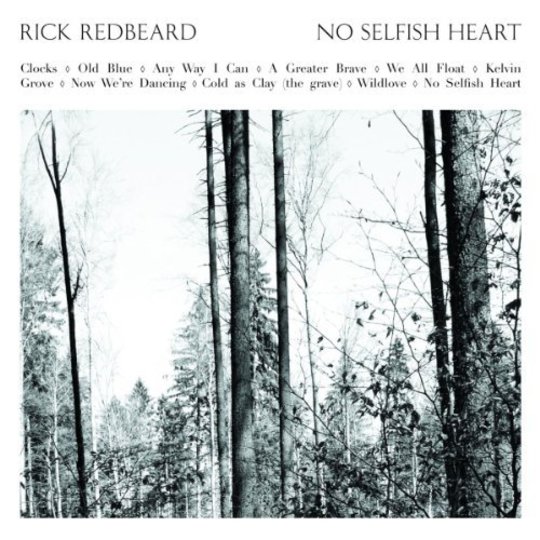 I'll be honest, right now I'm reviewing this album a bit drunk. And it's utterly destroying me.

For the past month I've enjoyed putting on No Selfish Heart every day on my commute. I'm a bit old fashioned in that I think a record needs multiple plays and situations to be worked out, so I've tested it out on everything from packed tubes to lonely walks home in the snow. This album shows why that's important more than many others I've come across of late, taking time to prove how much depth there is behind the simple facade of a solitary man playing a guitar.

When I first heard Rick Redbeard singing the fragile chorus to 'Old Blue' I was a bit skeptical. It verged on the naive and seemed very sentimental. But then I had a few bad days at work. Or a pint more than I knew I ought to. And upon putting this on at just the right moment, it all clicked.

I noticed lines I hadn't before: "Time is all we ever want more of". Subtle single piano notes adding depth. Barely audible harmony in just one channel.

Music reviews often try to describe what make a record so great / awful, but they're always facing an uphill struggle. Sometimes an LP just has that indescribable x-factor... something that transcends comment or analysis.

I shouldn't be surprised really. The Phantom Band have been one of my favourite bands for a while but hearing their lead singer record an album all of his own doing makes it all clearer. They're a collision of styles; part folk, part krautrock, all heartfelt. This record is wholly the former and latter. Fragments of a life captured for future listeners, containing hopes and desires almost too private to air. Breathlessly simple yet poignant; minimal but bursting with excess.

There's an inner beauty - no, honesty - to this debut. For many, its emergence at the top of the year will mean it is forgotten about come list season or entirely overlooked in favour of a romantic meal out in a few days time, but it'd be a crying shame. Few can be this succinct, poetic, engaging or downright Scottish on record. Yet it doesn't matter, because the few of us that find it will love it; discuss it over on the boards; nurture it. Come November when the list makers are clamouring to prove their relevance, another bunch will be with friends in a pub or nursing a whisky by a fire having had their lives briefly enriched by its existence, unbothered what public opinion is when personal matters so much more. This is a delightful record to treasure, made for those times you wish to forget about.

I hate reading back what I wrote drunk. But likewise I often struggle to convey how beautiful or exciting I find something when over-thinking it. This time though, for prosperity's sake, I'm leaving my first draft in.

And you know what? When not being cringe inducing, at times it kinda makes sense? Because if I was to analyse 'Now We're Walking' I'd probably mention the lovely chimes, the way Redbeard's voice teeters on the edge of breaking and how I find it totally charming. Hell, I could do that for every track here though.

But listening to this record seems less meaningful when pulling it apart so coldly. For I love the eccentricities; the desire to charm and be so transparent. I want to summarise this in some grand manner or with a witty analogy, but I can't. The truth is, it's one of those records you just need to experience to work out if it's for you. Last night, as many before it, it was exactly what I needed in my life at that point in time. I could rewrite that stream of consciousness or turn it into 'proper' dissection but for once I chose not to. Music is best when felt, lived, breathed and experienced.

This morning I like this record a great deal. But last night, I loved it.