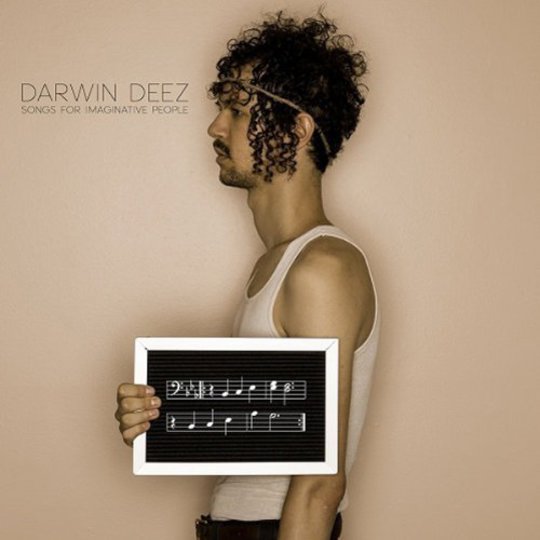 Darwin Deez flirts with the slacker, loser, outsider, counter culture, drop out archetypes and flirts well. He's got the kooky haircut avec hairband and fashionable clothes that look second hand even if they are part of a contemporary designer range. He embodies a feeling of hope, indicating that change is possible, remaining cooly defiant towards authority and aloofly rebellious: a serious try (not so) hard North Carolinian. And somehow he does it all in a way that is acceptable to the masses that means he sells out shows and wins points with his indie pop charting hits. The core of his charm is being popular and loveable whilst still remaining hip.

So here we have it, Songs For Imaginative People following on from 2010's eponymous weirdo folk pop LP. This new set of songs is self produced, with London's Charlie Andrew (Alt-J, Eugene McGuiness) on mixing duties. On the whole this album is much the same as the last one: not much has changed in Darwin's world and why bother when two years ago it was all so sunnily good.

Yep, at the centre, this new one is definitely more of the same trademark observational lyrics with spacious instrumental arrangements and twinkling guitar sounds. Though on the surface one thing is immediately different here, it's that the production values seem to have been taken to another overproduced level. The generally lo-fi frequency of Darwin Deez is now tuned to a different wavelength, layered up with extra warped effects. These new effects range from the distorted electric rock guitar on 'You Can't be My Girl' and twiddly noodley guitar solos like on 'Moon Light', the typographical 'No Love' or carefree 'All in the Wrist', to the gurgling electronics evident on opener '(800) Human' or 'Redshift'.

Then there are the stand out hit tracks, similar to the last album, but this time round there seems to be one or two less than there should be. There's the first loud quiet single, 'Free (The Editorial Me)' and another real Deez classic called 'Redshift', which encroaches on heartfelt ballad territory, yet has enough to keep it astrophysically ungroundedly imaginative and catchy.

This new outing from Darwin Deez then is more of the same. The essence of what makes him unique and special remains, only the production values have crept up a notch. On the whole sometimes the production frills work and other times they sound a bit too much. But either way his solid songwriting skills and lyrical wizardy remains and makes sure that when you listen to this, that you're not gonna anywhere else except in Deez land.