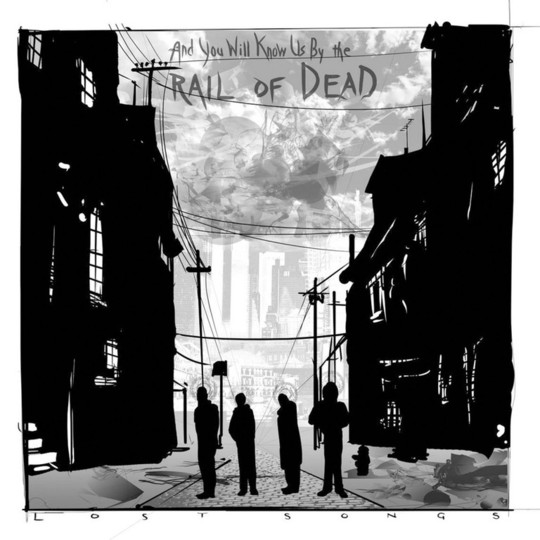 By now, we should know what to expect from a new …And You Will Know Us By The Trail Of Dead album. Where the brain trust of Conrad Keely and Jason Reece is concerned, you can pretty much rely on a throbbing piece of post-hardcore goodness – albeit allowing for some wiggle room depending on whether they're indulging their proggy side or writing straight up belters.

Lost Songs, their eighth full-length (released a whole ten years after major label debut Source Tags and Codes) firmly places itself at the 'belter' end of the spectrum. According to the band, the album was inspired 'by the apathy to real world events that has plagued the independent music scene'; if the aim is to get the blood pumping, they've succeeded in fine form.

The album kicks off in typical style, with bass, drums and guitar rising from underneath a sea of distortion before exploding into a frenetic release of major chords. It's heads-down for the first four songs, each more intense than the last, until the rising tide is finally broken by the title track. Oddly enough, 'Lost Songs' brings to mind early U2 - but it's OK, because at two minutes it doesn't last long.

The pace eases off through the middle third, with songs like 'Flower Card Games' inverting the songwriting formula set up in the first stanza of starting hard, easing off in the middle then finishing with a flourish. In fact, that structure neatly describes the arrangement of the whole album, with 'Heart of Wires' and 'Catatonic' picking up the pace again, 'Bright Young Things' bringing it to a crescendo, and bass-heavy 'Time and Again' finishing things off in quirky style.

…And You Will Know Us By The Trail Of Dead aren't springing any major surprises this far down the track. They do what they do best - prog-hardcore, driven along by guitar and drums. And by gum ain't it epic. It's like watching a well-crafted action film: you might know what's coming but you still marvel at the stunts, admire the panache with which it carries itself, and enjoy it for the passion that carries every scene.

Lost Songs ain't a new direction for …ToD. Far from it. But it's a frenetic, committed album oozing passion at every turn, and the world would be poorer without it.