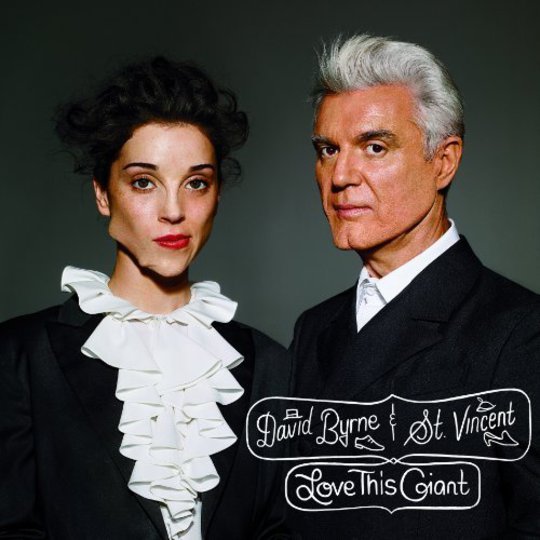 Collaborative records aren’t supposed to be good, history has emphatically taught us this. From Loutallica to that time the Sugababes and Girls Aloud obliterated ‘Walk This Way’, combinations that looked promising when scrawled on your school pencil case or an initial press release have turned out disastrously. Admittedly Watch The Throne was decent enough but by the time it was released, the world had only just forgiven Jay-Z for his two albums with R Kelly.

Given Love This Giant was inspired in part by Dirty Projectors’ mediocre get-together with Björk, it’s all the more remarkable that St. Vincent and David Byrne have come up trumps. Originally conceived as a one-off live project for Housing Works - a New York-based charity - it took three years and many an email for this partnership to flourish. Time well spent when you consider the album comes dripping with lashings of brass and enough charisma to inspire many a pale art-pop imitation to come. Lord help us.

Seriously, if you’re repulsed by the idea of jaunty trombones and the like then you best steer clear. Nearly all of Byrne and Annie Clark’s time is spent cavorting around the sound of a jubilant trumpet-lead fanfare acting like this is all an effortless dalliance dreamt up on a dull Sunday afternoon. The backstory behind ‘Who’ and ‘Weekend In The Dust’ clearly indicates otherwise but it seems a downright shame to envisage songs this dizzyingly playful being the product of laborious toil. “Hey, hey, Lazarus. Working your backbone, swinging that ass home,” coos Miss Vincent on ‘Lazarus’ with her typically sensual tongue placed firmly in cheek. The former Talking Head is also up to his usual lyrical tricks, babbling a semi-coherent stream of consciousness on ‘I Am An Ape’ and ‘I Should Watch TV’.

If there’s one thing that restrains Love This Giant from completely living up to its promise, then it’s the turn-based approach to vocal duties. At times, this plays more like a David Byrne solo album featuring Annie Clark instead of the equal weighting its title implies. There may well be a more balanced tone to the record’s under-the-bonnet contributions but that doesn’t stop us aching for more delicious interplay to be exposed in plain view. When you strike upon a vein of chemistry this rich, it seems rude not to mine it like a Texan oil baron.

So where in the grand canon of collaborative efforts does Love This Giantrank? It’s much better than the woeful double-whammy of Jack White and Alicia Keys and a damn sight more listenable than the grim experimentation of John Lennon and Yoko Ono’s early fare. In fact, the closest pairing to this imperfect gold standard is Zooey Deschanel and M Ward’s She & Him. Distinctive enough to be a new entity, smart enough to fall back on a few familiar charms. St. Vincent and David Byrne have brought out the best in each other - they should do this more often.