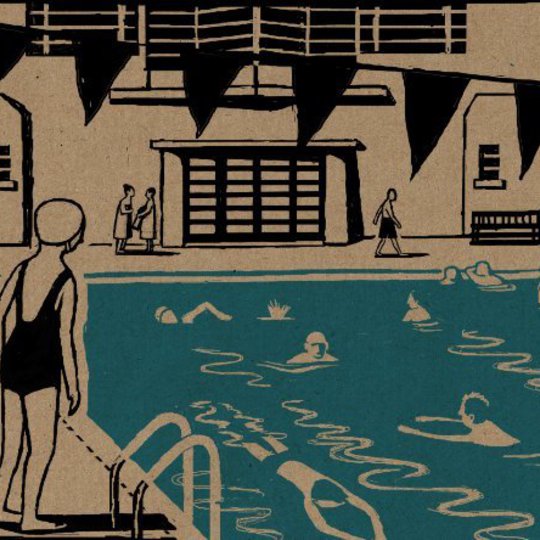 To anyone bemused by the Olympic opening ceremony, wondering what nurses, blacksmiths and Mr Bean had to do with Great British athletics, here’s a slice of sporting heritage from ex-Hefner frontman Darren Hayman. Taking a break from his horny underdog persona, the Essex singer has written a tribute to Britain’s open-air swimming pools - lidos - and recorded it without a single vocal. 'If I am known or liked for anything at all in my career then it is for my lyrics… I see words as incisive, accurate tools,' he claimed when he announced the project. It’s a triumph then that Lido is so precise and delicious, its instrumentals perfectly evoking warm memories of paddling under blue skies in chlorine water.

With the same homemade production as The Ship’s Piano, Lido is an hour of acoustic-electronic pop, each track swathed in nostalgia like Boards of Canada gone busking. Each track has also been influenced by an actual lido, with ‘Parliament Hill’s violins, beats and bells emerging from the roar of boys’ showers - one of several recorded for the album that must’ve netted Hayman some sort of restraining order. ‘Tinside’ is exquisite, just banjo and mellow accordions, and features the sound of the caretaker lashing the kids with a cold hose; the lido equivalent of a wave machine. Though obviously drawn from Hayman’s Thatcherite childhood, the era he’s targeting is a vague one - ‘London Fields’s plucked guitar and old keyboards could be a Seventies sitcom title.

Lido doesn’t just stay in the capital, and features enough musical variation to fulfill Hayman’s assurance that you won’t miss the lyrics. There are occasions, however, where he commands so much emotion that his reedy vocals would be a bonus: ‘Saltdean’ and its bittersweet keyboards could easily carry one of his venereal anecdotes, as could the sad shuffling banjo of ‘Black Rock Baths’ and its obvious verse-verse-chorus pattern. But it’s a tiny niggle, and Lido works best in its own quaint spirit, remembering the public pools as the hubs of the community they used to be.

And in some places, still are: ‘Stonehaven’, named after the Olympic-size heated seawater pool in Scotland, uses stylophone-led electronics from Hayman’s short-lived duo The French; one of the most promising projects of his career. It’s a bopping five minutes of experimental pop, juggling glitch with folk guitars and cementing the atmosphere Lido’s been striving for - people playing in city centres, innocent times that aren’t quite yet over. Hayman’s channeled this mood into music and the result is a delight, his compositions as sharp as the lyrics he’s dispensed with. Later this year he’ll release The Violence, an album about seventeenth-century witch trials that’ll no doubt feature lines about stakes, gibbets and ducking stools. Until then Lido proves a strange double truth: that a group of people isn’t necessarily a mob, and that you can be idiosyncratic without speaking.