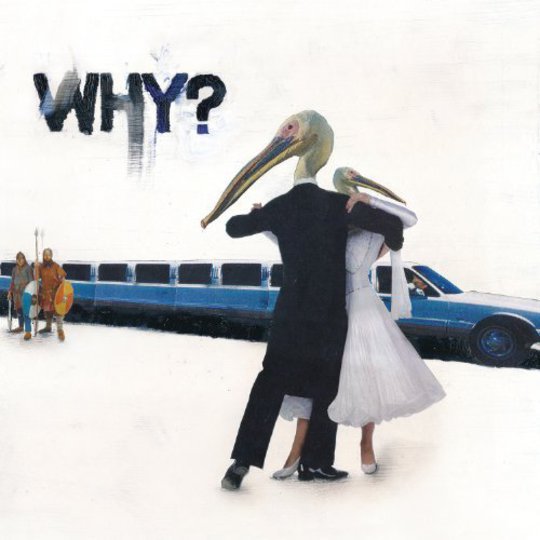 Let’s not beat around the fucking bush; Why?’s last record, Eskimo Snow, was a dismal disappointment. We all know that Yoni Wolf – the band’s neurotic singer – is a man with problems, and unashamedly so. But whereas the dazzling 2008 masterwork, Alopecia, channelled those problems into a compelling patchwork of brutal, thrilling, darkly comic images – their jumbled assembly and absurd detail more like dreamworlds than songs – the follow-up that came just a year later was dull and dreary, painfully melodramatic. Sure, Alopecia was melodramatic too, but it was melodrama spiked with razor sharp wit and keep-you-on-your-toes vocals that swung from nasal vibrato to throaty bum-rap. On Eskimo Snow, Yoni just sounded whiny and resigned. Most depressing of all, in what seemed to signal the final chapter in Why?’s ‘experimental hip-hop to skewed indie-rock’ narrative, he didn’t rap once.

So here we are, then, three years later: Why? are back with a new EP. Will Sod in the Seed prove – as Eskimo insinuated – that Yoni et al are destined to fade into the void of indiedo(o)m? For the first ten seconds – emo bassline, twinkly cheese-glock, quivering schoolboy vocals – I brace myself for the worst. Then the acerbic rapping Yoni jumps in with: “Let’s review some recent facts”, barging out pussy-Yoni, and I’m all like, ‘Fuck yeah! Batman’s back!’

I guess Yoni’s alter-ego is more Big-Willie Hancock than Dark Knight, but he is a similarly bleak kind of superhero, and – as the title-track’s snapshots scatter through the air like a deck of cards – it’s clear that he’s risen again. He was just teasing us with that beginning, you see – no way is he going to spend another record wimpily kvetching away. Right?

Well, to be honest, he starts his whinge-singing right after the opener, and keeps it up virtually the whole way through Sod in the Seed. But this really isn’t the tedious Eskimo Yoni. On ‘For Someone’, for example, the grumbling is akin to Larry David, wringing high drama out of a morning visit to the supermarket: it’s funny. Meanwhile, Graceland-esque drums gallop away in the background – and in fact most of the EP’s music is peppered with enough weirdness to rise above being straight indie, at times even recalling Why?'s debut, Oaklandazulasylum.

‘Probable Cause’ is a hilarious one-minute mini-story – “That time I tried to describe my hungry unwed life/To that statetrooper guy on the Pennsylvania turnpike” – before he surprisingly starts chanting about “real peace” in ‘Twenty Seven’, which he seems to have found in something called the “border of my most intimate geometry”. Would the only thing worse than a sappy miserable Yoni be a sappy contented Yoni? We don’t have to find out because rappy Batman-Yoni takes charge again for last track, ‘Shag Carpet’, telling prospective ladylovers how he’s so lonesome he’d let you take him out “if you look like my ex-girlfriend or Zooey Deschanel” but warns that he’ll be rifling through your purse while you sleep…

What’s going on here, then? We’ve got the thought-packed kaleidoscope of Alopecia in evidence, a fair bit of the singy-songyness of Eskimo Snow (though much better), and even a streak of the earliest, most adventurous Why? Could it be that they’re attempting to do what some bands do when they’ve reached their peak, and then tried something different – that is, to create a career-spanning sound that sticks two fingers up at the notion of linear time by embodying all incarnations of the band at once? I don’t know. I don’t even know if that makes any fucking sense. What I do know is that I can’t wait to hear how the hell it all turns out in their next full-length, Mumps, etc., coming this October.