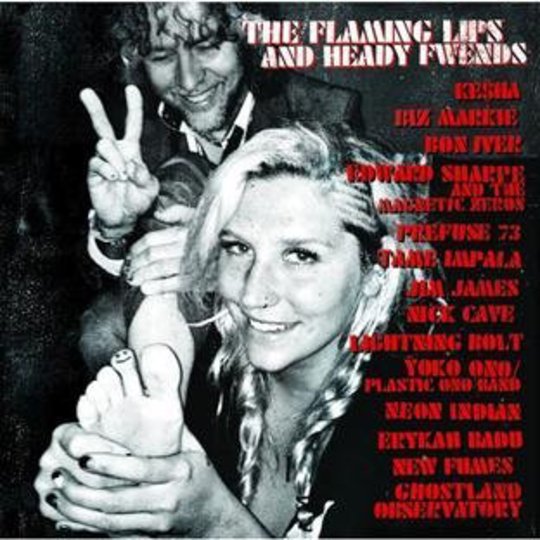 Like the dreaded remix record, collaborative albums tend to do little more than provide justification for the existence of the skip button. Jazz aside, rappers tend to pull off this kind of project better than indie/rock acts (Method Man/Redman, Jay-Z/Kanye etc.) and it helps if there are just two artists/groups collaborating with one another. I mean, now that the dust has settled I think we can all agree that Lou Reed & Metallica’s Lulu is the second greatest album ever made.

Albums on which one act hauls in a different guest for each song, however, are almost inevitably patchy. The sheer volume of performers will always include at least one or two acts which are not to the individual listener’s tastes. Often the concept itself feels cynical - an established, older (and perhaps washed-up) act desperate to attract a younger audience by roping in a bunch of flash-in-the-pan youngsters who are themselves wishing to garner gravitas and entice a wider, older crowd by cosying up to some legendary codger(s). Does Ray Davies genuinely 'love' Mumford & Sons? Is he really 'friends' with cabaret gnome Paloma Faith? Did Sir Tom Jones honestly dig the music of Mousse-T, Space and the Barenaked Ladies?

It’s difficult to believe that The Flaming Lips spend a lot of time listening to the hits of fratgirl vacuity-celebrator and serial dollar-sign misuser Ke$ha. Yet here she is on the first track of Heady Fwends, yelping over some intolerable electroclash nonsense like a discount Gaga dangling from a coat-hanger in the Topshop summer sale. Compared to this aural atrocity, the thought of Davies and Mumford politely desecrating the legacy of The Kinks seems positively heroic.

Fortunately, things get better after this opening nadir and although the results remain patchy, they are not as patchy as most albums of this type. Apart from the appearances of particularly dominating personalities such as Ke$ha and Nick Cave, most of the collaborators complement and embellish the Lips’ sound subtly, with Wayne Coyne’s lead and the Lips’ sci-fi, psychedelic sound maintaining some sense of coherence. The Lips retreat slightly from the bass-driven jamfest of 2009’s sprawling Embryonic, although there is nothing melodic enough to compare to The Soft Bulletin era and the mellower moments feel a little forced and half-baked. ‘Children of the Moon’, for example, veers too far into lazy Bolan-ian hippy drivel and ‘Helping The Retarded To Know God’ is a fairly dull seven minutes which no amount of birdsong samples can redeem.

The best moments are those which eschew any attempt to write proper 'songs' and instead simply try to convince the listener that he or she is travelling on an epic, wobbly, thrilling and frightening, mind-expanding journey through outer space. Effects-laden avant-garde jams such as ‘Supermoon Made Me Want To Pee’ and ‘Do It!’ (the former with Prefuse 73, the latter with Yoko Ono) are lyrically minimal but sonically rich. There is an infectious feeling of fun to ‘Girl, You’re So Weird’ and ‘That Ain’t My Trip’. Similarly, ‘You, Man? Human???’ features an unstereotypically gleeful turn from the Bad Seeds singer, revelling in its Cave-on-Coyne homoeroticism. “You can touch me if you want” invites Cave while “driving around in the middle of the night on a silver cloud”. He repeats the word “win” several times, though increasingly his pronunciation sounds closer to “Wayne! Wayne! Wayne!”

It is regrettable that the publicity surrounding Badu-gate has overshadowed the sheer beauty of the sublimely warped, catatonically slow, ten-minute cover of ‘The First Time Ever I Saw Your Face’ on which Erykah sounds like a lone castaway astronaut serenading a familiar but distant moon. It is an indisputable highlight and an inspiring demonstration of the heights to which imaginative, well-executed collaborations can reach.

The Lennon-plagiarising, Chris Martin-assisted ‘I Don’t Want You To Die’ has been dropped from this non-Record Store Day edition, but this is no great loss as it was a weak song in the first place, with Martin bringing less to the table than someone suffering from a debilitating table allergy. Instead the album now climaxes with Ghostland Observatory’s Aaron Behrens’ tale of upsetting the police. The title, ‘Tasered and Maced’, may give away the ending, but the engaging story unfolds over some appropriately disorientating electronics, this time closing the album on a high and with your skip button not as worn down as it might otherwise have been.