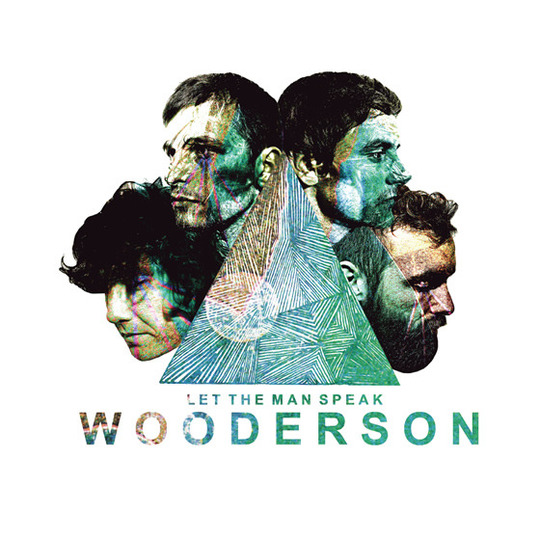 There’s an ideology that runs likes blood in the veins of DIY punk culture that goes something like this: write a song, play it, record it, put it out, repeat. With bands that follow these five simple rules there are no gestation periods or PR strategies; there’s no faffing around, defining a sound, whatever that means. There’s just a series of honest statements that say, ‘This is what our band sounds like right now – buy it, steal it, ignore it, whatever’.

For Wooderson (put the terms ‘DIY’, ‘punk’ and ‘Sheffield’ into Google and you’ll spot them in the first result) these statements have been made sporadically over the last four-or-so years, in the form of 7-inches, split singles, EPs and demo upon demo upon demo. If they’d wanted to, they could have made half a dozen albums by now, but they haven’t. Let The Man Speak is only their debut LP, and by releasing it now, almost half a decade into their career, they’re having their cake and eating it.

You can’t question the band’s DIY ethos – the endless gigging speaks for itself, as does the constant stream of recorded material, all of which was available online until fairly recently. Even this album, which comes accompanied with a press release (sell outs!), was largely recorded at Wooderson’s rehearsal space in Sheffield, run by the Audacious Art Experiment DIY collective, and it’s being put out by a two unashamedly DIY labels.

And yet the fact that it’s taken them this long to make Let The Man Speak shows some real business savvy. Because Wooderson could easily have let DIY dogmatism lead them into a trap early on, where they’d have written ten songs, played them, recorded them, put them out… and that would have been it. Debut album done.

But they didn’t do that, and thank God, because that debut album wouldn’t have been anywhere near as good as this one. You can hear the core components of Let The Man Speak in ‘Safeguard’, the first song Wooderson ever recorded – the deadpan vocals, the snotty stop-starts, the decadent discord and the fanatical Fugazi-isms. But now, more than four years on, Wooderson have taken all of that and made it much, much better.

Opener ‘Deluxe’, for example, is a post-punk party anthem, with chiming chords that transcend the sweaty severity with which they’re played. It isn’t just an outward expression of anger – it’s more cathartic than that, turning aggressive energy into something wildly upbeat and fun to have around, instead of sounding bitter and introverted. It’s followed by ‘Janet Bruce’ which, similarly, has a vicious temper in its stuttering bassline that springs into life with an ecstatic proto-punk chorus.

Later, ‘Cardinal’ reeks of War All The Time-era Thursday, with its glum harmonies and stark arpeggios, but Wooderson replace all of that album’s adolescent melodrama with stabs of guitar that stick out at all angles and delirious gang vocals. The lyrics to ‘Sleepwalking’, meanwhile, sound like they were written with an exclamation mark at the end of every line, judging by the way they’re so animatedly thrown out over a jutting, cyclical riff and blasts of brittle discord. ‘Mint Condition’ is sleeker, with guitars that slip and slide rather than chop and change, but there’s the same attacking spirit in the vocals. Strangely though, it’s the raucous rockabilly of closer ‘Let The Man Speak’ that finds two of Wooderson’s three singers sounding their most violent, with cold, distant, chants in the verses followed by snake-like rasps, gasps and whispers.

What Let The Man Speak isn’t is an album of unwieldy aggression bundled together in the name of keeping the DIY punk spirit alive. It’s far more sophisticated than that, with its cleverly overlapping vocals and riffs far sharper and smarter than your bog-standard three-chord punk, under-pinned by a relentless, uncompromising energy. It’s hard to imagine that Wooderson could have hurried out an album this strong when they first started, so it’s a good job they didn’t try to. They’ve bided their time, become a better band and made a debut record they can be very, very proud of.