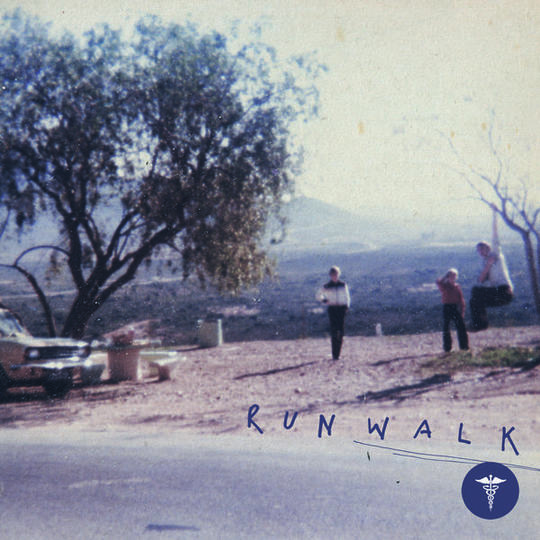 The saying goes that the light that burns brightest, burns fastest. It's fitting, then, that for a band so mercurial, so full of energy as Run Walk, their debut full-length is also their farewell.

This weekend, the two gents who have made up Run Walk for the last three years, Matt Copley and Tom Clements, will play their last show at the 2000trees festival, shaken hands and gone their separate ways. I's a shame, really, as (Health) - it's actually meant to be a caduceus symbol, which would blow DiS up - is their finest work to date.

If you've heard Run Walk before, you'll know they ain't subtle: 26 minutes of hypercaffeinated, twitchy post-punk/hardcore is what's on the menu. With that in mind, it's a touch odd to be ushered into (Health) by a languorous unnamed intro that slowly builds and builds... and releases into the first song proper, 'Blank Canvas'. True to form, it's angular post-punk that makes you twitch and rock like a speed freak, coupled with larynx-shredding vocals. This is the way it's gonna be from here too - don't expect subtlety or reflection: we're raiding the Pixies' bag of tricks and running away with them. Even amongst all the fun and games, though, 'I Don't Know What the Real World Looks Like' is a real highlight, hitching an infectious Devo-esque riff to a tremendous wall of noise.

That's not to say there's not the odd - rare - quieter moment. 'Out of the Blue' is reminiscent of early Sparta, and the atmospheric interlude '/////' - before closer 'Under a Rock' - is a surprisingly tranquil moment.

It's this closing track where Run Walk really slap you in the face. You see, this is where they show you the band that they could have grown into. It takes the twitchy, caffeinated rock, takes it beyond simple nervous impulse, adding a layer of consideration. It's a bittersweet moment,but it ends as it should: triumphantly, with a crescendo of feedback and barely decipherable lyrics being yelled over the top.

And then, in a second, it's over. Gone. Kaput. No more Run Walk.

This album is a statement, a signoff with intent. It feels a little as though the duo just let it all go, allowing themselves to be carried away by the nervous energy. That's no bad thing. Run Walk should be proud: they've said goodbye on their own terms, and when they're clearly at the top of their game.