East of the Elm 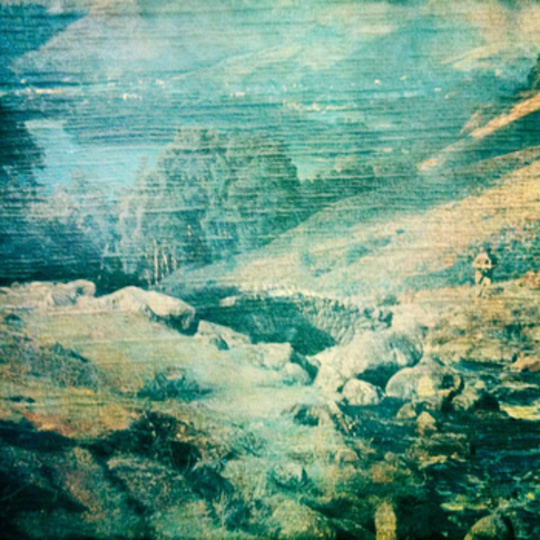 Ghost towns are on the rise. Whether it’s through hiked property prices, the lure of the cities or the power of Derek Acorah, more and more villages in Britain are becoming mothballed. If these places have a sound after they’ve been consecrated/fitted with squatter locks then it’s Ten: a duo from Leeds who’ve seen their fair share of decay (their city council has its own Empty Property Strategy), and have turned it into wafer-thin ambient guitar music. Anyone pining for Labradford or the golden years of Kranky can count East of the Elm a descendant - bleak, beautiful, and old-fashioned soundscapes; the kind that make you want to put a poncho on and walk thoughtfully into a storm.

The timelessness of East of the Elm has been carefully handled, with Dominic Deane and Jonny Fryer going for atmosphere over melody every time. This is a lonesome, wintry mini-album, full of so much yearning it’s a wonder the CD would eject. ‘Adrift’ features sad acoustic sliding and two chords played over and over, like an indicator. Without interruption it’s like watching a guitar breathe, the strings rising, falling, rising. The title track’s lightly strummed electrics suggest field of swaying corn, or empty houses lashed by drizzle that, for some reason, also contain a lone ominous banjo.

Occasionally, Ten get so lost in their world that their music becomes shapeless, and can’t even be recognised as the intended soundtrack for starving coyotes it wants to be. Perhaps that’s why they stop after 17 minutes, and try some variety to keep you from falling asleep at the wheel. The melancholy scales of ‘Paper Fragments’ recall ambient classical duo Swod, and whisper that somewhere in this decrepit landscape there’s a piano store still functioning. ‘Heart Beat’ is a folk hymn with a digital drum track; the sound of Craig David dumped in a desert. Compared to the other four tracks it feels busy, and is reset by the gentle ‘Little Tree, Big Heart’, where the forever-present scraped strings clear for one noble guitar, and just a sprinkling of rhinestone.

If it were a little more cheerful, then East of the Elm would make ideal picnic music, perfect for that one sunny moment without wasps. It’s a light, enveloping record, and Fryer and Deane know what to aim for when sketching out their bleak landscapes. But sometimes, the sound is so weightless you just want to fill balloons up with it. Ten keep things picturesque and frosty but it’s too early to dub them the new kings of the dustbowl - at least not until those who can handle both atmosphere and melody have departed. However, if you’re looking for something to cut old cine film with, or just want to see a pair of guitarists hypnotise themselves, these two have got the ideal bleak alley for you to walk down.