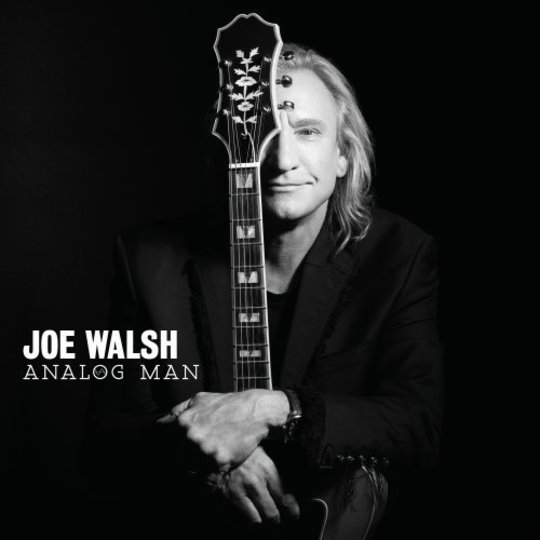 COMING THIS SUMMER! With as much SUBTLETY as AN EPISODE OF CSI bloody MIAMI! ANALOG MAN! The NEW ALBUM from JOE WALSH!

Joe Walsh hasn’t released an album in 20 years; you have to go back another 20 or so to find him at his peak. The world has changed a lot in that time, and Joe Walsh wants you to know this. “Welcome to cyberspace, I’m lost in a fog, everything’s digital, I’m still analogue” is the album’s opening line, backed by one of those Seventies riffs that Never Mind The Bollocks was supposed to ensure we would never have to endure again. 'HEY I’M AN OLD MAN,' it screams, 'BUT I CAN STILL ROCK OUT!'

In fairness to Walsh, there is a cohesive theme to Analog Man about a rocker of yesteryear trying to find his place in the world late on in his career. There’s no danger of nuance here, but nor does he stick to one tried-and-tested formula, instead opting to explore his entire handful of them. The piano-led, glittery synth-backed ‘Family’ for example is the kind of saccharine ballad that made us all hate the Eagles in the first place, with lines like “I finally found a wife and a home, and a family that matters” showing off a nice sentiment and all, but dear god my hungover stomach can’t take this. Meanwhile there’s the mercifully brief ‘Funk 50’, with that Tom-Waits’-oesophagus-blocked-by-a-Strepsil vocal and (oh for fuck’s sake) another rockin’ guitar line trying vainly to recapture what made ‘Life’s Been Good’ a hit in the first place.

You remember ‘Life’s Been Good’, right? That kinda silly hit about how Joe’s had a lucky time of it and he’s appreciative? That same shit he’s still singing about in 2012? I mean-

Apologies, a fictionalised version of Joe Walsh appears to be reading this over my shoulder.

FJW I guess you don’t like the record then?

FJW No that’s fair enough, but come on. What were you expecting? That I’d gone all Krautrock or something?

Me Well no, I guess.

FJW I mean, you’re writing this for an audience that adores Radiohead, Pavement and Antlers, yeah, that’s cool, but I have a fan base too.

FJW And in my defence it’s a big one. I don’t want to have an ego here, but this isn’t some shit Britpop comeback, a lot of people do want to hear this.

FJW You’re a dick, Dan. You know that?

Me I know. Colon, open bracket.

Now, this didn’t really happen, but the Eagle-shaped manifestation of my conscience is right here: if you’re out buying a Joe Walsh album, Analog Man is EXACTLY what you want to hear. Titles like ‘Spanish Dancer’ may only be matched for cheese by the absurd riff that opens ‘India’, but it’s so innocent and so friendly that you wouldn’t blame the guy for smiling at my raging face from a bed of money and telling me to take it easy (sorry).

Because it’s not my granddad’s birthday any time soon, this isn’t a record I’ll be urging anyone to go out and buy. Still, to throw those kind of criticisms at it as I did at the start of this review pretty well puts me on a par with someone who pays £4.99 for a holiday to Spain then goes on Watchdog to complain to Anne Robinson that it was shit. There are no alarms and no surprises here, but it’s a record produced by Jeff Lynne (who is a genius and anyone who says otherwise is a joyless idiot) so it sounds as bright, clear and appealing as anything this year. There’s a hell of a lot of people out there who still like anachronistic soft rock, and you’d have to be something of a shit to begrudge them this.