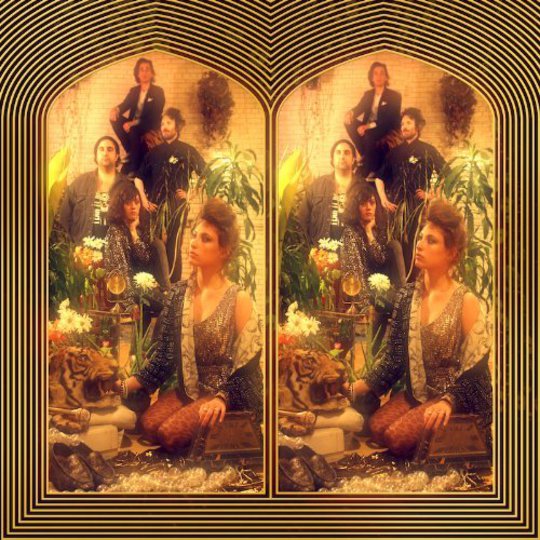 Nowadays the word ‘hipster’ elicits more bile than Linda Blair’s projectile vomiting. Divorced from its origins in the jazz world of the Forties, the word has been repurposed and redefined to become synonymous with the twenty/thirty somethings littering the pavements of Dalston on a weeknight, rolley in one hand and can of Red Stripe in the other, talking about their latest art exhibition in some Hackney hole. Entire blogs have sprung up devoted to hipster hate and even the broadsheets have got in on the action with column inches analysing the cultural phenomenon.

So, when you first clap eyes on Friends dancing at a warehouse, part-obscured by Vaseline stained overlays in the video to their debut single ‘Friend Crush’ it’s a knee-jerk reaction to mutter, ‘f*cking hipsters’. Their back-story doesn’t help first impressions. Hailing from the hipster-haven of Bushwick, Brooklyn the band got together when they were forced to crash at vocalist Samantha Urbani’s apartment after a bug infestation, so to kill some time they did some rehearsals. Six days later the band (then known as Perpetual Crush) played a show in Urbani’s backyard. Now, two years on they’re dropping their debut to an industry buzz louder than Nicholas Cages’_ Wicker Man_ bee mask.

But, if you do dismiss Friends as another hipster band you’re going to miss out on one of the debuts of the year. Manifest! is everything you want from a pop record, setting the hedonistic highs and crushing lows of everyday life to an infectious beat. The dah-dah-dah-dah Phil Spector-styled intro of ‘Friend Crush’ opens the record on a familiar high before diving into the Graceland-tinge tropicana of ‘Sorry’. An endearing balance of happy-sad, the record easily navigates its way from the Neneh Cherry swagger of ‘I’m His Girl’ to the lovelorn lament of tracks, like ‘Proud/Ashamed’. Nothing is over complicated, it’s all simple clean hooks and catchy melodies and apart from one song (‘Stay Dreaming’) no track cracks the four minute mark.

The record’s careful attention to rhythm is its key strength, which comes as no surprise with the band all being multi-instrumentalists (bar Urbani). What is a surprise is the way they work with it. Similar to Beat Happening and Tom Tom Club, rather than letting the rhythm dominate the tracks they’re secure enough to leave space to let the melody lead the way. ‘Ruins’ begins with a singular menacing bass-line backing Urbani’s snarl before coming off like Bikini Kill covering Bow Wow Wow, whilst ‘Stay Dreaming’ compliments sleepy vocals with relaxed trippy beats. The zombie-funk of 'Mind Control' is one of the few tracks where the beats go wild, allowing you to fully understand how Friends’ shows turn into impromptu parties - it’s pure undiluted fun.

The attention to melody is also indebted to the fact the tracks originally started out as home-recorded demos by Urbani. Recorded as something of an audio diary, Urbani is at the record’s core and a relatable protagonist for the young at heart. ‘A Light’ is the soundtrack to lost nights out, ‘Proud/Ashamed’ a downer on soured relationships (“I thought I knew you more than God”) and set-closer, ‘Van Fan Gor Du’, a full-throttle one single fingered salute to macho “assholes" hassling girls on the streets of NYC. Although, Urbani’s vocals can border on being a bit nasal (not to sound like an XFactor judge) every word is sung with conviction.

At a time when pop music is a production line, we could really use a friend. Leave your prejudices behind, shut your eyes and just enjoy.