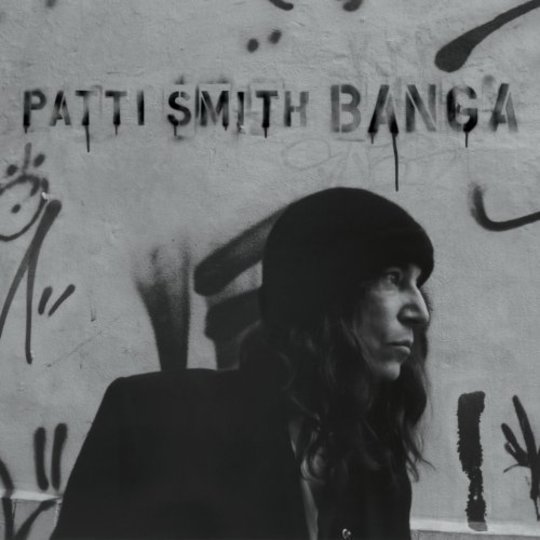 Banga is punk legend™ Patti Smith’s eleventh studio album and as usual Smith’s rough and soulful voice is still capable of sending shivers down the spine. Smith has always been a poet through and through and on Banga she gives the nod to other literary and musical figures from Russian writer Nikolai Gogol who inspired the record’s first single ‘April Fool’ to tragic songstress Amy Winehouse for whom ‘This Is the Girl’ was written.

The problem with Patti Smith is that some of her greatest strengths can also be her greatest weaknesses. She naturally gives a poetic feel to all her lyrics but sometimes the poetry can get a little bit too much. And she likes her tracks epic, certainly on this album. For 'epic' you can read 'long' if you like, but generally with some big ass build up, which can sometimes veer into the territory of overblown. Whilst Smith bears the status of ‘punk priestess’, she is, let’s face it, a bit of a hippy. And this is coming from a long-time fan of Patti Smith, but we have to level here. Some of this album sounds like you should be getting naked on a hillside to it. Which is fine sometimes but when she starts going on about how the “eternal son runs to its mother” on ‘Tarkovsky (The Second Stop Is Jupiter)’ you do find yourself rolling your eyes a bit as it’s not the first time on the album such imagery has been alluded to. Elsewhere on that track, the imagery gets more exciting and bleak, “The sea is a morgue… these things that float in blood that has no name”. Nice. It appears to be an epic meditation on the planets. Trust Patti.

‘Constantine’s Dream’ is the longest track on the album, clocking in at around ten minutes and I have to admit my mind was wandering by the end. It’s great to have a build up but by the end of a lot of tracks on Banga, the enormous build up then swirling climax feels a bit formulaic. Impressive as it undoubtedly is.

Not all the tracks follow this path; ‘This Is The Girl’ the Winehouse memorial, comes across as an attempt at an old skool soul crooner ballad. It doesn’t do it amazingly well but is saved, as are most of the gripes I have with the album by Patti’s voice, when she sings high and long drawn out as she does when singing “This is the blood that turned into wine” you feel it viscerally in both words and sound. The vocals could bore into your soul.

After the marathon of ‘Constantine’s Dream’, a cover of Neil Young's ‘After The Goldrush’ is tender, naïve sounding piano balladry, highlighting the raw strength of Smith’s voice. Perfect for putting on and collapsing on your bed thinking about what you’ve lost. Only slightly tainted by the children she gets on to sing with her for the choral reprise.

A bit of musical beauty, some interesting lyricism and a pinch of hippy bollocks - still distinctly Patti Smith.