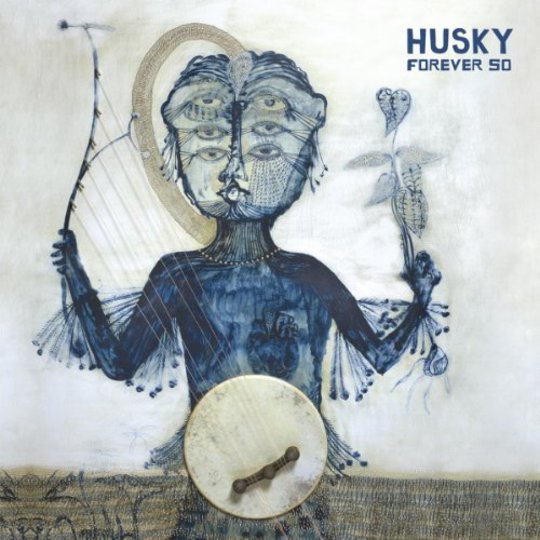 I contemplated the angle to take when writing this review whilst at work. To earn my crust I work in Retail Security, an ideal job for a daydreamer. Whilst considering the legacy of Sub Pop, the record label which signed Husky, my thoughts were rudely interrupted by a radio call. A banned shoplifter was in the food hall, and needed to be ejected. Christ on a bike, the adrenaline rush jolted me into life, and I stooped over to the dairy aisle, where the shoplifter was last seen. A sense of calmness swept over me when I arrived by the milk fridge and saw that the shoplifter was not a burly brute or a scabby hepatitis riddled junkie, but a sixtysomething male with NHS specs who looked rather gaunt and frail. I informed the male that he was banned from the store and had to leave immediately, he dropped his shopping basket to the floor which contained a few ready meals and a variety of cheeses, called me a 'silly bastard' and hurriedly left the store. That was it, job done, back to the daydreams. I would say it was the highlight of the day; however that was probably chatting up the make-up girl from Superdrug later that afternoon.

So, Husky the first Australian band signed to Sub Pop. The significance of this probably matters most only to the Australians. In fact, is signing to a label significant even for a band anymore? You could make arguments for labels such as Rough Trade, Warp, Domino and XL, but as time goes on, having the endorsement and support of a respected record label, a stamp of approval if you will, matters less and less.

We know about Sub Pop, how its founders learned from Motown and SST, gave Seattle a cultural identity and more importantly a sound.Jack Endino became the Berry Gordy figure, churning out the albums, and then the label launched the career of a little band called Nirvana, who legitimized the whole project. In recent years Sub Pop was mellowed somewhat, and the artists currently signed to label such as The Shins, Fleet Foxes, Niki & The Dove and Beach House represent a less abrasive, more eclectic roster.

Husky, named after frontman Husky Gawenda (I know, how freakin’ cool is that first name) fall in line with the rest of the pack, existing in chillville. Each song on Forever So is impeccably produced, rich and full sounding, yet retaining an intimacy that recalls long summer drinking in front of a fire with your pals. They are close cousins to their label mates Fleet Foxes, albeit without the delightful vocal harmonies.

Gawenda’s reserved, almost reluctant vocals make the album an engrossing listen. For a band raised on the classics (Dylan, CS&N, Neil Young and the Beach Boys) Gawenda’s unique tone carries the album, particularly when ‘Tidal Wave’ begins with a here-we-go-again acoustic driven hum, and the worst is feared. ‘History’s Door’ is friendly and familiar, providing drum rolls and merrymaking aplenty. The title track is rather quite stunning, a spider walk across the fretboard, and dainty background keys make one of the shortest tracks on the album, one of the most memorable. ‘Don’t Tell Your Mother’ and ‘Farewell (In 3 Parts)’ respectably close the album in an earnest manner.

Husky’s best songs are carefully paced and uncomplicated; when they attempt to aim for cod-psychedelia they produce some turgid tunes. The slow burning momentum of Forever So is interrupted by several duds. ‘Fake Moustache’ is an excitable pumice stone rub to the testicles, or do be less self-mutilating, a pile of trippy hippy cow dung. ‘The Woods’ though attempting to sound ambitious is pretty dull, with unimaginative composition and bland lyrics. The needless instrumental on a debut album serves no purpose whatsoever. ‘How Do You Feel’ has this glum ‘Mad World’ style atmosphere to it, though lacks the same ominous intensity.

If you want a faultless new Sub Pop release then pick up the Father John Misty album. If however you want to listen to a young band starting out on the rocky road, or you are Australian, then this album is for you. As for the future, the magic appears to be there in places, Husky just need to learn to channel it better. There is possibility that after touring this album hard, they might find inspiration from road weariness, and release something less naïve, and a heck of a lot more sincere.