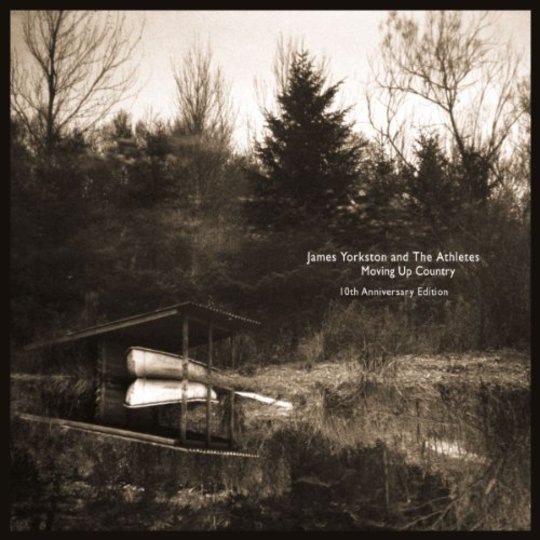 So ten years on from James Yorkston’s debut LP, Domino have decided to reissue it. What ever for? Well, although it enjoyed a cult following all those moons ago, plus the John Peel stamp of approval, it’s still arguably a bit of a forgotten masterpiece. And while many other flames have burned bright, flickered and died since those halcyon days, Yorkston’s has remained constant, with three more solid records to build on the playfully lugubrious, hazy longing of Moving Up Country. (Other 2002 debutants include Interpol, Justin Timberlake, and Daniel Bedingfield, and we have now been waiting a whole decade for a follow-up to Crazy Town’s second album Darkhorse; alas, those were simpler days.)

Maybe it’s a side-effect of looking at something through the prism of Old Father Time, but Yorkston seems to strike an escapist chord for this, his first record, filling it with a yearning for a less complicated world, all bonnie girls (Yorkston hails from Fife) and gentler shores. Opener ‘In Your Hands’ is full of little watercolours like rolling down grass slopes while the sun “welcomes the runners, dogs and the cars”. It’s a million miles away from urban riots, economic crises, and the imminent coming of En Sabah Nur, serving as a kind of manifesto for the record – a simple manifesto, fittingly. “I’ve got it all worked out,” Yorkston sums up, after conjuring so many slices of tranquil village-esque life, before explaining, plainly: “I’m in your hands”.

Apart from the charming words, there are smile-triggering musical touches dotted throughout, like when all the instruments slip away towards the end of ‘Cheating the Game’, except for the cabasa, shuffling absent-mindedly centre-stage before it realises it’s the last man standing and coyly scurries away. Or the wave-crashing noise at the start of ‘6.30 Is Just Way Too Early’ that’s answered by a lazy, honeyed bass sliding in, which curiously reminds me of the piano at the start of David Bowie’s ‘Eight Line Poem’.

Perhaps it’s all a bit precious for today’s Mad Max world, but putting all those touches together gives the sound real depth, proving (if ever proof was needed) that acoustic composition doesn’t have be stripped-down and spare. With a foreground of intimate, occasionally wavering Aidan Moffat-ish vocals, plucked and strummed guitars/lap steels that surround you with two or three variant melodies and effectively provide the rhythm for most of the album, and a wistful but unfaltering double bass, it feels as if you’ve stumbled into some ancient pub buried in the Scottish countryside, and you’re taking your first blissful sip of cider, when some folksy bunch casually start up in the corner and instantly become your best mates. Meanwhile, a background of accordion, swelling strings, harmonicas and rickety organs bleeds through, always at the right moments, like that friend with a talent for saying the right thing at just the right time.

It says more about me than it does this album that my favourite track is the only one that can stake any claim to being raucous, but ‘I Spy Dogs’ is a gem nonetheless. Picking up the pace with light percussion and ringing pianos, it sounds like a lost track from The Kinks Are The Village Green Preservation Society, with its wry observations and tender humour: “And he knows this cannot last/And dreams he’s far away…” Yorkston quips. “And if he got himself a mask/Could he really fly away?”

Even when he’s full of lament and regret as on teary break-up song, ‘Tender To The Blues’, recalling Elliot Smith in his admittedly less dark moments, there’s an air of levity: “You’re not the girl I thought you were, I suppose/you leave me tender to the blues,” he utters, but he sounds less devastated, more accepting that sometimes things just don’t work out, while the clarinet brazenly competing with his vocals and sharing in his woe seems to also be softly mocking it.

Of course, as a reissue, this wouldn’t be much more than a, ‘Hey, have you ever heard this?’ without any variation from the original. Here ‘lost single’ ‘The Lang Toun’ is tacked onto the end, an unhurried 10-minute daydream that somehow sounds at once chirpy and tense. The bonus disc, meanwhile, includes Yorkston’s 2002 Peel Session, which aptly conveys the emotion and sincerity of his live performances, while there are also several demos, mostly unreleased. Standout amongst these is the immensely fun ‘Worthy Souls’, a roughly recorded, slightly dizzying race to the finish that finds Yorkston bitter and argumentative for a change, though still, you sense, laughing at himself a bit too.

Moving Up Country deserves to be remembered as one of the noughties’ finest records, and with the help of these fascinating extra tracks, this reissue should see that become reality. You know, if there was any justice in this sadly not-so-simple world.