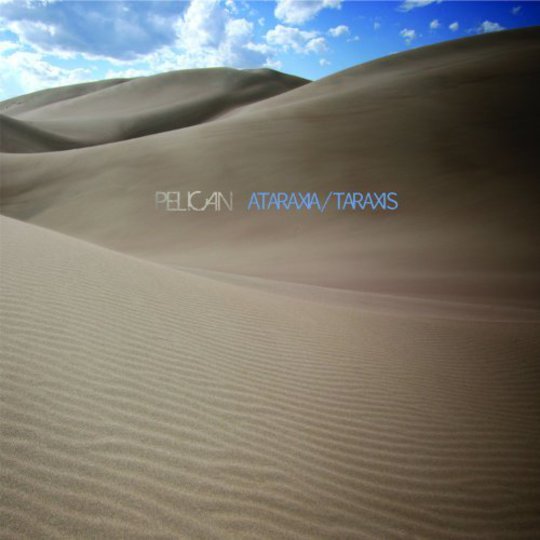 Song durations can come to define certain artists, especially when it’s possible to tag their music with all-encompassing terms like 'prog' and 'post-rock'. One of these bands is Pelican, whose last foray into more diminutive durations resulted in 2007’s oft-critiqued City of Echoes, which they themselves describe as their 'pop album', designed to get crowds moving during live shows. With new EP Ataraxia/Taraxis, the Chicago four-piece have returned to songs that barely scrape over the five-minute mark. But what does this mean for the quality of material on offer?

The answer is very little: Ataraxia/Taraxis is a concise, yet remarkably diverse, collection of compositions that manages to cram all the drama of 12-minute epics into more manageable timeframes. That the four tracks were recorded in four different studios is hard to tell; not only is it concise, but Ataraxia/Taraxis is surprisingly cohesive, despite its frequent dynamic contrasts.

The titular tracks which bookend this EP are notable primarily for their use of keyboards and acoustic guitars (and, on ‘Ataraxia’, lack of drums), both providing masterful depictions of underlying tension, but also highly evocative of the EP’s sparse desert sleeve. The use of more varied instrumentation shows a willingness to experiment, similar to the appearance of guest musicians on 2009’s What We All Come to Need, but this time keeping it within the band itself.

In between the title tracks are a pair of significantly heavier propositions: ‘Lathe Biosas’ is an uptempo feast of riffery, while ‘Parasite Colony’ sounds suitably doomy, like the downtrodden work-song of humans under parasitic control. Judging by the fact I was even able to write the last sentence, it seems fair to say that Pelican have become remarkably capable conjurers of aural atmosphere, even if the overriding theme is one of an impending apocalypse.

For those who haven’t approved of the direction Pelican have taken in recent years, Ataraxia/Taraxis may be seen as a mediating middle ground between their earlier, instru-metal moments and latter-day post-rock anthems. At no point does the EP feel repetitive or forced, rather it signals the sound of a band reinvigorated and ready to experiment with strong melodies and even stronger song personalities. Ataraxia/Taraxis reinstates Pelican at the top of the instrumental food chain and, if they continue like this, they show no sign of coming down.