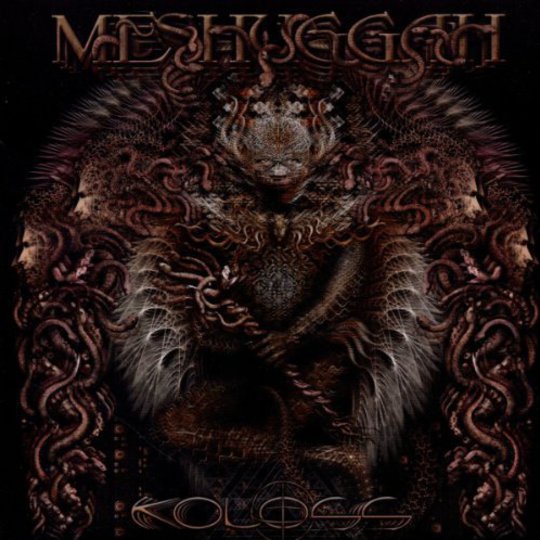 As the nights get shorter and spirits lift, nothing can warm the cockles like a new long player from rambunctious, intense, claustrophobic, polyrhythmic industrial-strength thrash metal from Meshuggah.

But beware: these metallers can’t just play guitars and drum at lightspeed, they’re also good at maths, meaning Meshuggah’s apocalyptic soundscape comes at you in strange time signatures. Lumped in with a math metal movement with the likes of Mastodon and Dillinger Escape Plan, they have been around since long before both bands, busy inventing a sound many others have imitated for the last 20 years.

Hailing from Umeå in Sweden - they were never going to be from Basildon were they?- Meshuggah make music closer to a sonic weapon than something you could call a collection of 'songs'. The act of playing this kind of thing is like an artistic extreme sport, only much, much louder.

Drummer Tomas Haake describes new record Koloss - the first since 2008 - as “organic brutality, viscera and groove all crammed into a 54-minute metalicious treat, best avoided by the faint of heart!!”

His jaunty exclamation marks do nothing to prepare the listener for the brutality and power contained here. More funky and in places lighter than the air-tight, meticulously powerful ObZen, Koloss is fun enough to make the headache worth it.

Incidentally, just to establish the Spinal Tap credentials here, Haake was once laid up for several months after cutting three fingers in a 'bizarre wood grinder accident'. These people use eight-string guitars, making Steve Vai look something of a part-time jazz-metal weirdo.

As for the record, there’s no easing your way into it: opener ‘I am Colossos’ follows the general rule that being an evil god-like entity that doles out existence willy-nilly is a pretty good theme for a sludge-metal track, as singer Jens Kidman declares: “I am liiiiife, I am deeeeeath, I decide your faaaaate.” Frankly it’s hard to disagree with him.

Before you’ve been able to count the time signature (7/4?) it’s straight onto the pneumatic drill-meets-Slayer of 'The Demon’s Name is Surveillance’. It's double bass onslaught and relentless rhythm all the way, a bit like putting Evil on auto-fire. (Without dwelling on the time signature thing too much, some Meshuggah tracks contain guitars playing in 5/16 while the drums stay in 4/4 - that is approaching impossible on the scale of difficulty, while also edging towards pointless on the is-there-a-point-to-this? scale)

Fans of Pantera will enjoy the irrepressible boogie of ‘Do Not Look Down’, an album highlight that marries Kidman’s guttural growl with an almost bluesy groove. The slow-burning ‘Behind the Sun’ almost recalls Time of Grace-era Neurosis. It’s hard to imagine many other bands pulling off the riff on 'Marrow', while the moment when ‘Demiurge’ takes off at 3:40 really is one to just stand back and admire.

It may sound like the gates of hell have been opened to a general listener, perhaps even to some regular DiS fans, but this is an accessible record - it’s relative poppy compared to previous works such as 1998’s Chaosphere. Opeth, with whom Meshuggah share an awful lot in terms of influence and longevity, made a more dramatic shift last year with a soft prog rock record that displayed genuine musical mastery but ended up being a bit boring.

Koloss, however, is a real triumph of its genre: inventive, surprising, pleasingly punchy, unashamedly aggressive with just enough shade, tone and melody to balance the raucous but impressive production.

For those considering taking a walk on the very heavy side, this might not be a bad place to start. For anyone already smitten by the idea music-as-earthquake, dive on in.