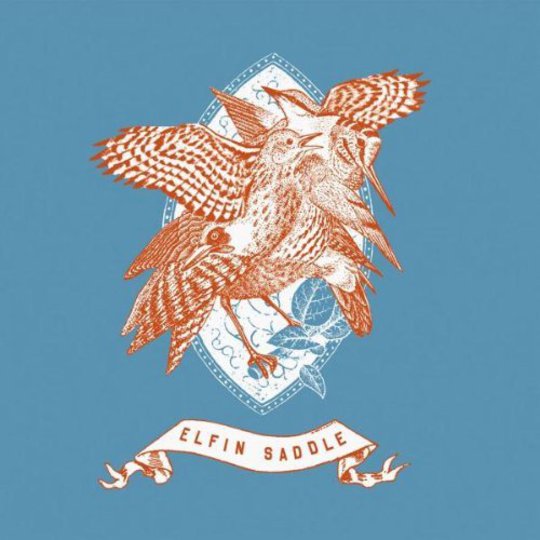 Elfin Saddle’s new album Devastates is a voyage through a soundscape world that rolls and tips like ocean breakers. It is intense, passionate folk music shot through with a sense of urgency and, at times, menace. This is not background music; it demands attention lavished on its ethereal vocals, abstract rhythms and at times frankly uncomfortable discord. But as with many journeys, while there are some stunning vistas, these are interspersed with decidedly less exciting views.

The other wordly feel running through the quieter moments reflects the abandoned chapel in rural Quebec where the album was recorded, a setting perfectly suited to Emi Honda’s strong yet pure vocals. Into this chapel were brought a multitude of instruments from percussion to accordion, ukulele to pump-organ, cello to bells, with which to build and strip away dense walls of sounds.

The first song on the album, ‘The Changing Wind’, is like walking into a Middle Eastern curiosity shop. Delicate jangling notes settle into a lilting rhythm punctuated with beautiful vocals, only to drop down with unexpected force into an aggressive, cymbal-heavy section that rips the music from its traditional folk roots. This duality is a strong theme running throughout the album, as the musicians explore the conflict between nature and technology. Their preoccupation with environmental and political issues is clear even when the lyrics are lost in sound waves, or in the Japanese lyrics Honda sometimes reverts to – it is apparent in the birdsong of ‘Invocation’ against the grating jagged edged sounds as the tide of noise builds towards the final moments of the first track.

The highlights of this chameleonic creation are without a doubt the moments of understated clarity in tracks such as ‘Boats’. Here it is difficult not to walk right into their world, see the boats gathered in the harbour, sun reflecting off sails. Or take the long, cross-track string sections in which the same note is bowed without respite for minutes on end, creating a tense, ominous backdrop like eerie storm clouds gathered on the horizon.

However, there are times when the music seems indulgent, such as the slow-paced seven minutes of ‘In a Blanket of Leaves’. Certainly it is daring, and does not drop in intensity for a moment, but the heavy, lugubrious rhythm feels weighed down by its own gravity. The instrumental is too stubborn, the discords too insistent. No matter what it’s called, it begins to feel more like being wrapped up in thorns and hit round the head by the end.

That aside, this is an accomplished album. It is overflowing with rich and exciting melody, the harmony between Honda and male vocalist Jordan McKenzie’s voices is simple and elegantly executed. The experimental blurs with folk elements, and the operetta-style song cycle eases listeners masterfully through their patchwork world. Conceptually driven and zealous in their music, Elfin Saddle certainly have a lot to say for themselves and a unique, technically brilliant way of saying it.