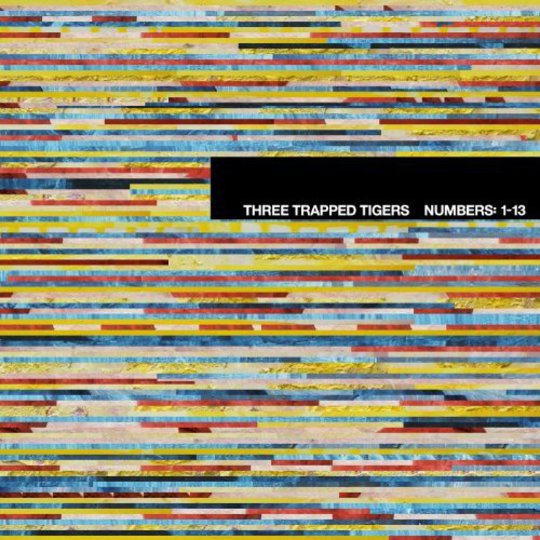 Sometimes, it’s nice when the Ronseal effect comes into play. Like with Disney’s Cars: that title left you in no doubt what the film was going to be about. The same goes for Three Trapped Tigers' compilation Numbers 1-13: these are the first 13 songs the band wrote and recorded, originally released across three EPs but now arranged in chronological order and reissued on one hour-long album. It’s a good thing too, since physical copies of the original EPs sold out aeons ago.

Following the initial EPs, debut album Route One or Die was one of the musical highlights of 2011, at the very least in terms of the diverse range of influences it combined: no other band has quite pulled off the post-math-electronica-jazz-rock thing, partly because of the extreme hyphenation it requires. So Three Trapped Tigers stand relatively alone in their field, but are by no means trapped by their own doing. Instead, it was this collection of 13 groundbreaking compositions which gave them the virtuosic teeth to keep any imitators at bay.

The chronology of Numbers 1-13 showcases the band’s steady progression from dexterous keyboard melodies to multi-layered math insanity, with the first five tracks (bar ‘3’) composed solely by keyboard wizard Tom Rogerson, while Matt Calvert’s screechy guitar plays a more prominent collaborative role from ‘6’ onwards. At its most basic, this is electronica with a live drum kit and a drummer with 1s and 0s for brains, but the intricacy of the rhythms and the transitions between arrangements are mind-meltingly ingenious.

It’s the stop/start mentality of ‘2’, the gentle meanderings in ‘9’ and ‘6’s powerful melodic motifs that do away with the need for song titles, even if it does occasionally make for difficulty in writing this review. It’s a brave statement of intent: without lyrics or even titles, all that’s left to judge Three Trapped Tigers on is the music, a potentially foolhardy move were that music anything less than extraordinary.

While some songs can veer towards impenetrability (‘3’s laser gun polyrhythms, the relentless synth assault in ‘8’, ‘10’s mechanical syncopation), it’s never long before drummer Adam Betts reins his bandmates’ imaginations back in with driving rhythms, providing focus and direction, but never so much as to impinge on the gloriously unhinged nature of the music on offer. It is a rare occurrence to listen to a piece of music and genuinely have no idea where it’s headed next, but it’s an uneasy sensation that Three Trapped Tigers take great pride in.

For a collection of EPs recorded right at the outset of a band’s career, Numbers 1-13 is remarkably consistent. It balances beauty and eclecticism in near perfect measure and, while they may have progressed to greater successes since these initial ideas, there’s a sense of unbridled joy here that will give these early EPs an identity apart from Three Trapped Tigers’ future work. Until that materialises, Numbers 1-13 stands as an example of a band not only in possession of vividly fantastical dreams, but also the ability to realise them musically.