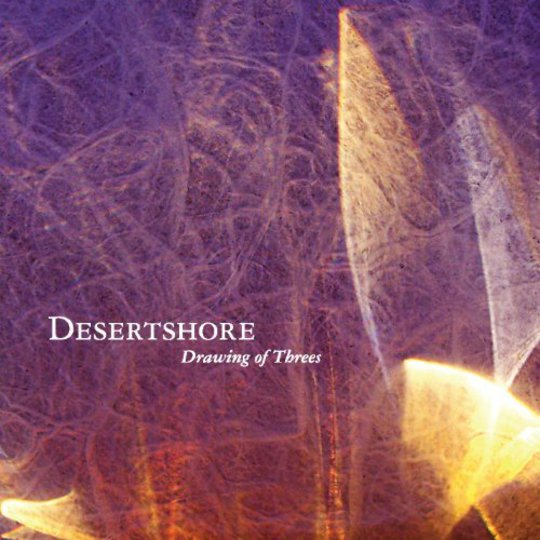 The feeling you get from listening to Desertshore’s Drawing of Threes almost suits the way the record sort of stumbled together. It’s a drifting, mellow piece of work that slowly swarms on you like a cloud; before you know it, you’re immersed, springing up surprises before it eventually evaporates into a lingering haze that’ll stick to you long after it’s gone.

For this follow-up to 2010's Drifting Your Majestic, Desertshore - multi-instrumentalist Chris Connolly and Phil Carney, formerly of Red House Painters – had every intention of continuing in the instrumental vein that had shaped their first outing together. However, after enlisting Carney’s former bandmate Mark Kozelek (also of Sun Kil Moon) to handle production duties, the project’s creative scope grew along the way to accommodate Kozelek’s input, and when combined with additional players Dave Muench and Mike Stevens on bass, the record eventually flourished into a dreamy, layered and consistently engrossing long-player.

Kozelek’s silk-woven vocals appear on six of the album’s ten tracks, and from the first notes he strikes on opener ‘Diana’, he just sounds so at home. Drawings of Threes' tender, sleepy shuffle is steered by Kozelek’s sweeping harmonies and could easily be something churned out on a latter-day ‘Painters record. But that’s not to suggest this is regurgitation. Rather, it’s more of a continuation of a musical aesthetic that Kozelek, Carney and Connolly clearly seem in command of.

The album is flecked with poignancy and darkness. Even 'Diana' itself gradually descends into a sombre spray of distortion before coming full circle. ‘Mölle’ is altogether more bleak, handholding you through some desolate jazz bar with its melancholy swing. Meanwhile, ‘Vernon Forrest’ is surely the stuff of teen drama makeout sessions – a point perhaps backed up by Kozelek’s past contributions to shows like The OC. Its sensitive piano phrases, twinned with a stripped down performance from Kozelek that erupts into angelic, echoing harmonies, further cements his position as the king of college rock knee-weakeners.

‘Mercy’ is easily the lightest and most playful moment on the album, the kind of song you find virtually impossible not to describe as ‘summery’. However, as dangerously sweet as it might seem at first, it’s pretty difficult not to enjoy. It has a gentle acoustic pulse that propels in into the territory of some ‘everything’s going great’ montage in a wholesome family movie but is weathered by a mature collaborative performance.

As the album stirs towards its final passages, piano dictates much of the mood, which is generally steeped in melancholy. But while it may feel like the majority of these short pieces bring the mood right down, flashes of the earlier playfulness and nervous excitement return with the likes of ‘Hellborg’ and closer ‘Matchlight Arcana’.

Considering this was a fairly casual experiment, unplanned in a sense, the resulting concoction of music feels remarkably defined and completely intentional. It all works well together, and perhaps only suffers from the lopsided running order which puts Kozelek’s vocally-led pieces in a clump at the front, letting the album tail off into back to back instrumentals.

To stick vocals on everything might well have been overkill, perhaps even bringing a complete change of identity to the band, considering Kozelek’s inclusion on this record was fairly last-minute and unplanned. However, presenting such an obvious gap runs the risk of diluting interest towards the end. But with the majority of material being this strong, chances are it won’t impose on what is generally a warm and rewarding listen.