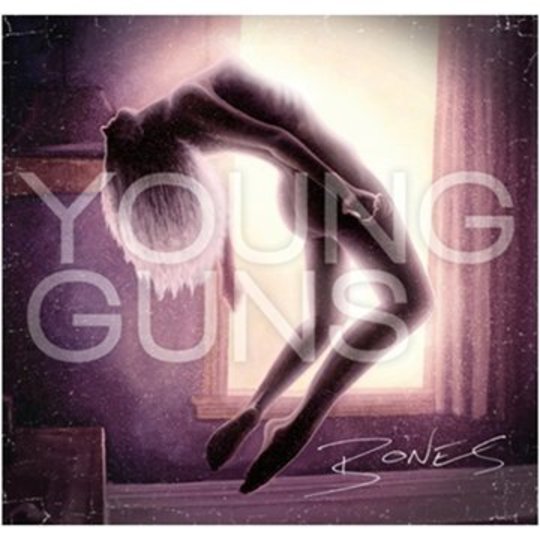 What’s next when your anthemic debut album earns you support slots with Enter Shikari, Lostprophets and the mighty Bon Jovi? Do you lap up the luxury of your new status or do you aim for bigger things? Well, if you’re Young Guns, you go back the places you started. On the press release for second album Bones, pretty boy frontman Gustav Wood says: 'We ended the first album cycle on a real high, playing venues we’d always dreamed of, but this record is a rebirth for us.' Not that you’d notice the redirection. Bones, like debut All Our Kings are Dead, is a slick production that attempts to tower above everything else with huge, energetic rock moments. Listening to it you wouldn’t even think these four young lads were from High Wycombe.

Rocky-like tales of triumph over adversity loom large throughout Bones. ‘I Was Born, I Shall Surely Die’ ignites a propulsive start. Taking cues from In Your Honor-era Foo Fighters, soaring octave guitars are pushed by hammering rhythm sections before Wood assures: “Don’t turn away/don’t be shy/you’ve got questions/so do I/and today is a chance to change the story.” The title track, which pays homage to Lostprophets’ nu-metal beginnings, sees Wood deal with broken faith “crushed by its weight.” Both tracks provide an ambitious start and the band’s intentions only heighten further as Bones progresses.

Unsurprisingly, Bones has a distinct American feel despite the band’s British origins. Take ‘Brothers in Arms’ which, with its surging melodies, is a post-rock take on the Gaslight Anthem; Wood’s deep voice resembling Brian Fallon’s boom with Rise Against’s Tim Mcilrath roar added for good measure. Bones’ crowning moment comes with ‘Everything Ends.’ It’s a sorrowful tale where Wood “had a conversation with a dying man / Whose life passed by in a blink of an eye,” the track flitting between Boxer-era National and Liberation Transmission-period Lostprophets.

However, there’s the feeling Young Guns only have one type of structure; big climaxes that churn from the bottom of their stomachs before exploding like an angry behemoth. This means that by the umpteenth song it all gets a little tiresome and, at times, it feels like Young Guns feel the same. For example, ‘Towers (On My Way)’ opens like Refused’s ‘New Noise’, aggressively aiming for the jugular, but fumbles and swipes the air instead. It’s a shame the acoustic balladry of ‘Hymns for All I’ve Lost’ only lasts for a minute something eventually being shelved off as a filler when it could potentially be one of the album’s more subtle, yet endearing tracks. You eventually wish they’d give the stadium anthems a rest and be more of that small band from High Wycombe.