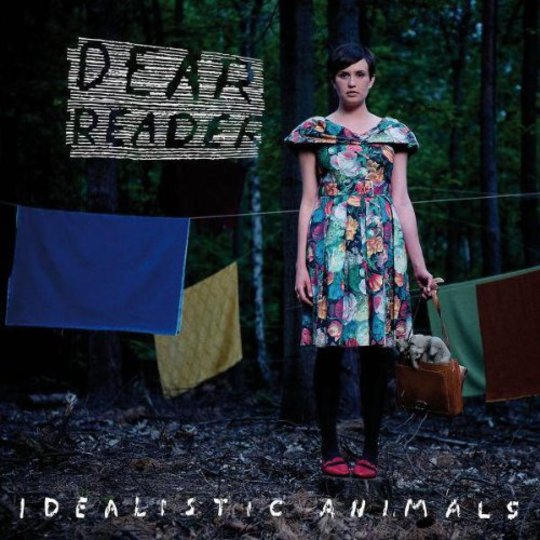 Everyone loves a good yarn. A barnstorming story with a head-turning introduction, a gripping middle and a heart-warming resolution to conclude on. While Dear Reader’s Idealistic Animals bounds over the first hurdle with showy pizazz, it quickly loses all cohesion in a swarm of middling ideas and underwhelming songs.

The background to Idealistic Animals is almost as convoluted as the record itself but here goes. At some point after the recording of her debut album Replace Why With Funny, Dear Reader - a.k.a. Cheri MacNeil - came to the realisation that she had lost her faith in the Almighty. To add to the onset of her mid-twenties crisis, this Emmy-The-Great-alike also took leave from Johannesburg to Berlin.

It was in this mindset of newfound atheism and geographical detachment that MacNeil decided to name each song on her second album after an animal. The press release claims this is meant to signify the gloomy philosophy that 'there’s little separating humanity from the rest of the animal kingdom' but, honestly, your guess is as good as ours.

So what of the LP itself? Well you’ll have a tough time deciphering such grand thematic concerns from the likes of ‘MOLE (Mole)’ and ‘GIRAFFE (What’s Wrong With Us)’, mainly because their side-splitting titles are preposterously distracting. On a serious note, the technique of addressing deeply personal grievances in grandiosely abstract metaphors just distances the listener from what should have been the central plotline of Idealistic Animals. Imagining yourself as a giant wave consuming New York in ‘Whale (Boohoo)’ is all very well but what emotion is such a song meant to prompt other than utter bafflement?

Dear Reader’s saving grace is her free-spirited way with instrumentation. A lot of the album is spent tinkering around with strange time signatures, shoehorning a string or wind section into a song and generally being all quirky. Sometimes this experimentation comes off, as with the ethereal whimsy of ‘Monkey (You Can Go Home)’ and the breezy melancholy of ‘BEAR (Young’s Done In)’. For the most part, this is all too fumbling to truly convince, leaving Idealistic Animals bereft of any sticking point from which to hang its considerable eccentricities.

The overriding impression left by Cheri MacNeil’s latest record is that she’s created a sprawling web of allegories to skirt around any uncertainty she’s not yet willing to address on acetate. There’s a pervasive somberness at the heart of Idealistic Animals which is crying out for some bruised balladering or, at least, some lyrical directness. This insistence on maxing out on subplot, comes at the expense of an initially intriguing premise and, ultimately, your attention span.