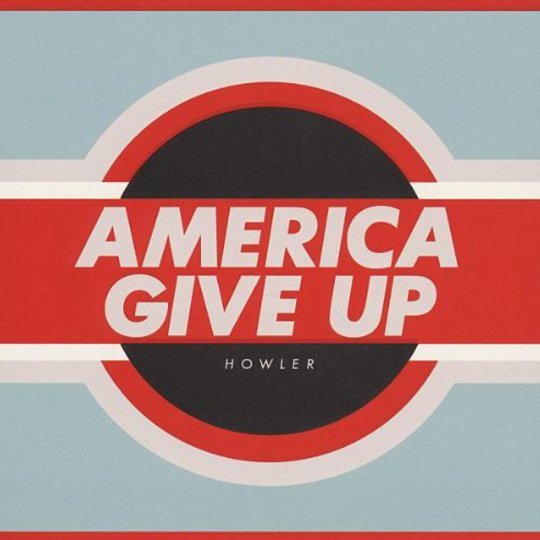 It’s not unfair to say records easily liked are generally harder to review. Falling awkwardly into this camp, America Give Up, the debut full-length from good old-fashioned six-string Minneapolitans Howler, is a hurtling, high-octane thing, as welcoming as it is entirely unoriginal. It’s “seeing double”. It’s “drinking in the afternoon”. It “wants someone to take me home tonight”. Propelled upon the sporadically wonderful Rough Trade raft, it is unquestionably a big, brash, bubbling barrel of larks. No one here’s denying that.

Now, while it’d be barmy to suggest this precludes the thing from criticism, you suspect there are certain self-righteous sorts who’ll insist that, as a casual listener, indulging a natural yen to delve further, to peer into America Give Up’s prospective soul, is not only pretentious but elitist and bizarre. Slap on an 8/10 and turn that frown upside down, they cry; way to miss the point bro, yada yada. The temptation is to mumble in agreement, cursing the beard-strokey alternatives rife among this site’s scattershot sweethearts, before hossing the retro stylings of the physical record into the used-promo drawer for scant revisits. But I mean, that would be WRONG, no? Isn’t it pretentious, condescending and lazy not to delve further? To pretend, as is fashionable, that simply because there is an inebriated time and a convenient place where This Sort Of Thing could scarcely fail to flourish, it’s beyond the humble listener to raise an unmoved hand of indifference?

Ours is a violently apathetic, mediocre generation, and as such, it deserves gods, poets and eccentrics for figureheads. Feisty as, oh, a vicar’s washing basket, America Give Up is music for people who think ‘guitar music’ is dead. Music, without doubt, for people who, whether before or past their time, have given up on music. It’s a lop-sided sex routine in the washed-out toilets of a washed-up toilet venue. It’s McDonald’s apple pie and series three of The OC and Cool Original Doritos without dip on an innocuous sick day. The great misfortune is that its occasional onsets of hangdog confessional (“sometimes my mind feels like an ashtray”, ponders the pleasant ‘Told You Once’) needn’t grate so. But Howler market themselves as a balls-out antidote to all that boohoo namby-pamby. Truth is, the boys are equally susceptible to a good brood, albeit without the broad strokes of compassion you’d expect to render such excursions worthwhile.

That aside, one prevailing concern is that America Give Up’s beached, underwhelming songs tend to bypass Being Especially Memorable, instead favouring instant, buddyish amiability. For example, the incessant, floundering, song-long climax of ‘Wailing (Making Out)’ couldn’t be more Julian Casablancas-on-youth-elixir if it tried. No bad thing. But the puzzler is, if a collection of this ilk isn’t indispensably singular, baring its chest and getting its flavour-of-the-month rocks off - which, fleeting eruptions aside, this isn’t - then what is it? And why, you wonder, does lead single ‘This One’s Different’ sound like a dull sack of Hot Hot Heat leftovers, a monochrome Television, where fellow newcomer Devin Therriault’s brand of Hivesy fretmania soars? It probably has little to do with creativity, which neither possesses in spades, but moreover charisma, confidence and flair. Howler boisterously notch up a timid one-out-of-three.

These ruffled runners-up masquerading as bright young hopes founded their schtick on underdog-appeal. Now, their debut offering will win top prize for naffness, while their diminutive ages - which average out somewhere between 19 and 20 - dull the subject matter but not the pain. Let’s not pull punches - lord knows they’ll get their sandcastle-fortress of column inches elsewhere (indeed, frontman Jordan Gatesmith, the Howler wikipedia page boasts, landed a heady forty-fourth position in NME’s 2011 Cool List): the grim reality is that comparisons to The Strokes do the New Yorkers a significant disservice. Catchy, bratty and phenomenally uninspiring, America Give Up is not so much shouting from the rooftops as howling at the moon. Which is to say, much like the historic originality vs quality debate, you kind of struggle to give much of a toss either way.