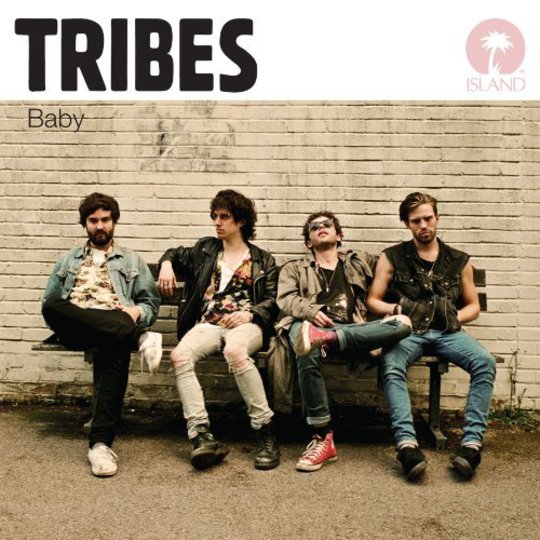 Here’s what indie music was missing in 2011 - the reliable 12-track 40 minute thrash-down. Any rock band naming their debut after a Justin Bieber hit have got to be worth investigating, and Tribes certainly are, resolutely denying any change in music since the year the Longpigs broke up. One glance at their cover art tells you all you need to know: 'We take ourselves more seriously than Towers of London, and also, it’s well past time grunge made a comeback.' There’s an army of Chalk Farm teens who agree with them, flashing their iPhone lighter apps at any of the band’s lively in-stores. And quite right too, because aside from the ripped jeans, bongs and Kurt Cobain worship - plus the hoarse production quality they’ve achieved by demanding they be recorded on tape - Tribes aren’t too terrible at what they do.

They also aren’t too brilliant. Grunge-soaked it may be, but Baby is a defiantly London album, less Smashing Pumpkins and more Coming Up-era Suede. The mix of screaming, distortion and catsuits has been cut to fit ex-Melody Maker readers, the stoner riffs and vocals incorporating nods to US sitcoms and Blur. It’s a garish mix that occasionally lines up: single ‘We Were Children’ balances Johnny Lloyd’s Drums impersonation with Dan White’s Eighties-friendly, mostly triumphant guitar solos. The hook sticks, and when Lloyd squeals ”On no, stranger / You’re just like me / These things happen / We were children in the mid Nineties” you can feel the irony on his lips. ‘Halfway Home’ is even more tongue-in-cheek; a quiet, post-pub comedown with a guitar break like a harpooned orca. The fey folk beginning sets you up for James Taylor. Lloyd’s cry of ”I’m not in love with you” sounds more like he’s trying to convince himself he’s 10cc.

It’s when Tribes try to crank things up that they begin to come unstuck. There’s enough background wattage on Baby to light up a business park, but when the band really go for it - usually about once a track - it’s like watching poodle rock being shot with a tranquiliser. Something’s stopping them finding their own niche in the scene, and keeps them flitting across the Atlantic stuck in 1994. The crumbling streets of ‘Corner of an English Field’ do a fine job of painting the UK in all its cider-stained, anti-Olympic glory, but as Lloyd takes a walk to the places he would play (only to find a child has passed away, and it hasn’t been the same), it’s like seeing Blur’s ‘Parklife’ transported to an actual park. Speaking of Blur, ‘Alone or With Friends’ has to be the most unashamed ‘Tender’ knock-off this decade, feeding psychedelic licks through Damon Albarn’s echo chamber. It’s a glaring attempt despite Lloyd’s decoy of sex tips in the lyrics: ”Just let go and let your body do the work / Like an angel made of stone, in the dirt.”

The cookie cutter style of Baby isn’t offputting, and ultimately comes down to one question: do you like eating biscuits? Tribes’ plagiarising isn’t as brazen as, say, The Enemy on Music for the People, but it isn’t too far off - there’s not much here to peg Baby out from any other album made on two Fender Strats and a provisional driving licence. Angst comes pasted in in tar brush strokes, whether it’s ‘When My Day Comes’ and its throaty dad-rock (so clumsy even Bryan Adams wouldn’t confess to it) or the Nineties pastiche of ‘Walking in the Street’ which blends ‘Two Princes’ with Ned’s Atomic Dustin’s guitars. It’s a jumble, but a lot of bands have started far worse, and Tribes at least know roughly who they’re aiming for. If you got concussed during the first Pearl Jam tour and have only just come out of your coma, boy, have we got a great new sound for you.