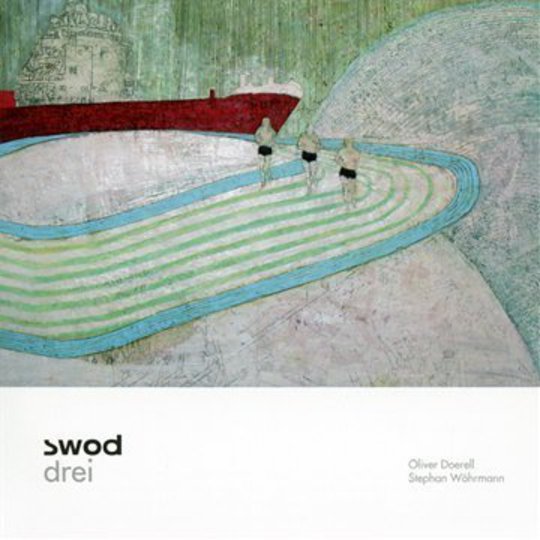 One of the most unique acts on the Berlin electronica scene, Swod are a duo with a supernatural edge. Stephan Wöhrmann writes operatically charged piano cues; Oliver Durrell accompanies him with crackles, clicks and squeaks, creating a sound straight out of Dr Jekyll’s daydreams. Their music isn’t so much nostalgia as functioning time travel: hearing a Swod track is like stepping through a door into an old ballroom, a few computer glitches following you in. The four-year gap they leave between albums is for reasons more deliberate than symmetry - Durrell spends seasons writing noise for Wöhrmann’s solos - so it’s something of a shock that for their third LP, they’ve decided to tweak the formula.

Since Sekunden (2007), Swod have mastered more than the piano, and can now imitate a fully-fledged band rather than icy little pieces of the past. Drei is a rushing, cinematic return, with the ghost count increased to maintain maximum skin crawl - the atmosphere is still very much like receiving music tuition in the house where they shot The Stone Tape. ‘Sans Peau’ is the first taste of the duo’s makeover, with Wöhrmann’s brittle piano backed by folk guitar and sampled monkeys, whooping like they’ve fallen prey to voodoo. It’s tense, eerie but beautiful with it; ideal for the 'Where’s my wife?' sequence in any number of foreign thrillers. ‘Hellerau’ shows off the new instruments even further, mixing frantic cash registers with the kind of piano loops Orbital could wring a whole rave out of. Durrell drums along with chopsticks, and by the end it’s like hearing two dusty old music scholars losing their shit.

For anyone worried Swod might have sacrificed something in the bigger orchestra, Drei still features all the quirks of their last two albums, including the ‘nothing but pianos and track title spoken out loud’ moment. ‘Gemein’ takes an ancient Fraulein’s voice and sets it to vinyl, caught in one of Wöhrmann’s spiraling scales while machines rattle in the background. It’s the voice that propels it, cropping up again on ‘Insel’, where the dialogue translates to “No one comes back from my island”. Durrell twangs his guitar like a nutter in dungarees; Wöhrmann departs and hits back with ‘Oktober’, prodding out his most emotive piano line to date with a single slowly accompanied finger. The game of spookiest instrument runs through the whole album, each one prickling until the other stops for air.

The final balance on Drei is fantastic, and confirms Durrell and Wöhrmann as a very arresting, unlikely duo. They’ve grown stronger with each release, but are careful not to overuse the new toys now they’ve changed tack. Though Wöhrmann’s compositions still dominate, Drei’s best moments are shared, such as the shrieking tapes of ‘Largo’ which builds to live drums, organs, bass and crackling. It’s as close to delight as these two Germans have got, jostling along like ghosts in a mosh pit. Interludes like ‘Eins’ or the squealing mice’s nest of ‘Intro 2’ are equally atmospheric, using their seconds to wind things back to the typewriter age, trying to pierce your subconscious. Drei concludes as a haunting, tightly-assembled album, and if you ever feel you’ve been born too late, or if German art film The White Ribbon isn’t arty enough for you, don’t worry: this record will be. If only Ingmar Bergman was still alive. He’d be chasing these two down the street with a paycheque, shouting “Soundtrack!” in Swedish.