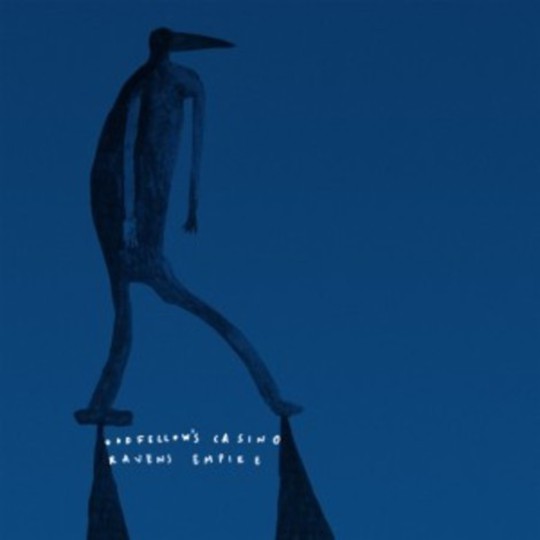 'Dr' David 'Oddfellow' Bramwell is, it is claimed, a classic English eccentric. That last word should always inspire dread in those of us of a more cynical disposition, but there's no denying that the sheer breadth of his creativity makes for an impressive CV before we even get to his music; he founded the Cheeky Guide book series, runs an anti-Room 101 night called the Catalyst Club, hosts a touring sing-along Wickerman tribute show, and has hosted an award-winning BBC Radio 3 show, The Haunted Moustache. Plus he's a part-time primary school teacher. Despite this multi-faceted résumé he maintains that his primary focus is Oddfellow's Casino his band named for the Victorian freakshow run by Ambrose Oddfellow (Bramwell owns his moustache, naturally).

For all the curious endeavours mentioned above, The Raven's Empire turns out to be pretty straight forward affair, which is not to say it's a dull one, but rather it is an outlet for Bramwell to explore his more macabre and supernatural interests rather that the outright bizarre. Atmosphere is undeniably something for which the octet (backed by the Brighton and Hove Concert Band) have a talent. Opener 'The Day the Devil Slipped Away' is the perfect case in point, a tangled copse of delicate acoustic guitar, restless electric piano and burbling electronics. Unlike any other track on the record which is otherwise uniformly restrained, 'The Day the Devil Slipped Away' concludes in a cacophony of crashing cymbals and crunching guitars after a beautifully disquieting crescendo of brass, organ and dissonant synths.

The mellifluous fingerpicking and clicking percussion of 'Winter In a Strange Town' make it sprightly and stripped back in comparison, emanating, in spite of its title, autumnal images of bronzed foliage and low dappled sunlight, redolent of The Clientèle at their most rustic. Nonetheless, there is still a lingering menace in the spectral choral effects and relentless repetition of the songtitle. This is a trick that is played to maximum effect on 'We Will Be Here' repeated as if an occult incantation, accompanied by the simple ritualistic pound of tom and snare it's the one song where it feels like Bramwell is threatening devilish misdeeds rather than warning of them. The gorgeous 'Bluebirds' rounds off a decent first half, the stark beauty of the skeletal piano and spectral reverbed vocals is driven by a shuddering beat and buzzing synth line, pitching itself somewhere between the barest balladry of Antony Hegarty and the urgent momentum of Trent Reznor and Atticus Ross' soundtrack work, a nice hint of modernity for a group whose inspirations are steeped in the lore of the past.

Unfortunately, like an inexperienced huntsman in a dense forest, the second half of The Raven's Empire sees Oddfellow's Casino lose their way. The thrummed double-bass and truncated piano runs of 'The Crows and the Rooks' are sort of pleasant, but melodic shortcomings mean they fail to register any other effect. Despite the promising Chris Isaak-style slide-guitar of its intro, 'When the Comet Came' is rendered too drowsy by the lounge pacing and monotone vocals, which are made more nauseating by the autotune style effects. The attempt to liven things up with extra instrumentation towards the end only serves to overstuff the track. This is a fate also suffered by the plodding album closer 'Death Won’t Have Me', but in fairness it possesses a slightly more affecting air of melancholy.

Thankfully, the album's second side does possess one saving grace in the form of the exquisite 'You Came To These Woods To Hunt Me'. Compared with the stuffier tracks it possess the cold harsh clarity of an Ingmar Bergman film, with stately piano fading in over the screech of distant dissonant voices until its only company is Bramwell himself. The lyrics and music are never more perfectly matched; a bell knells ominously (“The sky throws down an icy rain”) and warbling brass suffuses the chorus with warmth (“...warm your bones on a drop of rum”). None of the piling on instruments here, rather a stirring but restrained chorus leads into the wheezy harmonium of the second verse, gathering momentum and weight on its momentous trumpet-punctured march towards the songs end. This is The Raven's Empire at its best. It succeeds in being both atmospherically true to its inspirations and personally affecting, the perfect balance of idiosyncrasy and dynamic songwriting. Oddfellow's Casino never sound less than handsome, at least, but they can plainly do better.