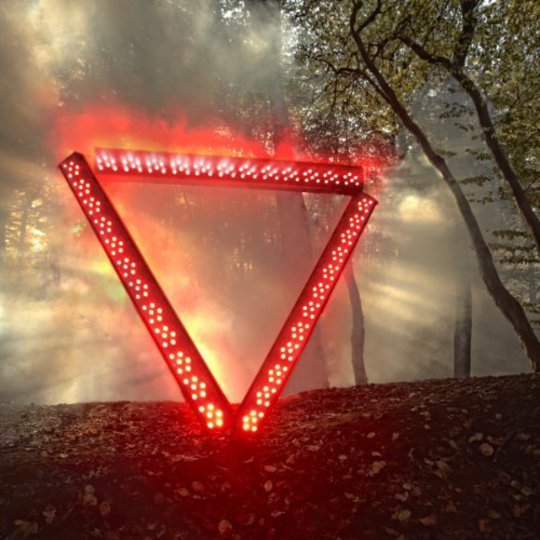 Jesus. Where do you start with A Flash Flood Of Colour? Well let's try... at the start, all the way back to Korn's Jonathan Davies and those Adidas tracksuit bottoms.

Sure, there are other sign posts to Enter Shikari's sterile, witless turn here, on this the St Albans lads' third studio album. Nirvana's compressed, proto nu-metal Nevermind is a guilty party, as is the Beastie Boys' Eighties frat-rap, while other precursors include the dumbest examples of Irish-American hardcore, second wave emo, the dastardly Pendulum, or Berlin-era Hadouken! (stag do). But there's something about those testosterone-soaked, nylon-shiny, incongruous, corporate-logo'd leisure pants that keeps you coming back; a stink-ass avatar to the utter wrongness of A Flash Flood Of Colour's particular lineage of rock mentality, that uniquely naff nadir for urban/rock fusion it feels right to classify as 'sports-metal'.

Although their artistic credibility was overstated back in 2007, by dint of a tenuous day-glo connection with nu-rave's art school set, the foursome were legitimate trailblazers, earning them both the Kerrang! Spirit Of Independence gong and the NME's John Peel Award For Innovation. However, perceptibly regressing from their teen-made debut on follow-up Common Dreads, and further with A Flash Flood Of Colour, they've vanquished all the lithe, cutting aspects of their trance/post-hardcore creation, emerging as something like the Def Leppard of screamotronica. Back in the day it was all shifting math-punk time signatures and gurny synth licks, while the titular “Anything can happen in the next half an hour” was a great youth sentiment and a perfect summation of their boundlessly excitable sound. Forward rewind to 2011 and it's all Nero-grade dubstep, amateurish drum'n'bass and mid-twenties pot bellies. Which, most probably, will find favour in America; conceivably amongst sexually-pushy Ivy Leaguers, UFC fans and Hummer limo drivers.

As for the agit-prop lyrics, while admirably well-intentioned, the foursome have a bit to go before that Gang Of Four collaboration. The format goes something like: “War is Baaaaaad / It is Saaaadd / We are Maaaaaad / The people are Rad! /...Every rose has its thorn”. Then some "Can't we all get along?" stuff, gang vocals, a synth build up, and...(wobble bass)...LET'S GET FUCKING NUCLEAR. Sometimes they mix it up, say with the computer-voiced “System Meltdown!” bit on 'Meltdown'. Torrid temple-massaging ensues.

Several songs are interspersed with bits of contrived studio banter (“Chill out, CHILL OUT... remember Ghandi mate"), implying they might actually be taking the piss. But have no illusions, Rou Reynolds is deadly serious, his earnestness providing perhaps the best unintentionally funny moment of millennial music (“We're sick of this shit..!!!”...cue botty-pumpin gay-disco beat). And nothing says Revolution(!) quite like emo vocals. On Common Dreads, the howling naivety could be forgiven on the basis of age, but they're getting on a bit now.

With the risk of patronising the age set, undisputedly it's the underage crowd that will get the most out of this. In fact, in its field it's something of a pogo-pit Marquee Moon for folk who don't smoke yet. The energy levels are off the charts - as a point of principle most tracks contain no less than 59 sections, each roughly 2.5 seconds long. Screamo-tech barnstormer, 'Sssnakepit', makes Funeral For A Friend sound like Songs Of Praise, whereas, technically speaking, 'Arguing With Thermometers' is music's first fully realized punk/dubstep hybrid, for what it's worth. Meanwhile 'Warm Smiles Do Not Make You Welcome Here' is an emo-metal gem (if you can bypass the vocoder bit) while 'Pack Of Thieves' is alternately beautiful, if typically shallow. It's also worth mentioning that they boast a stronger melodic nous than any one of their peers in crossover Brit hard rock. Which helps when you need something to hold on to throughout the melee. The bottom line is, if you aren't bolstered by Reynolds' strangulated punk scream, you're either dead or of voting age.