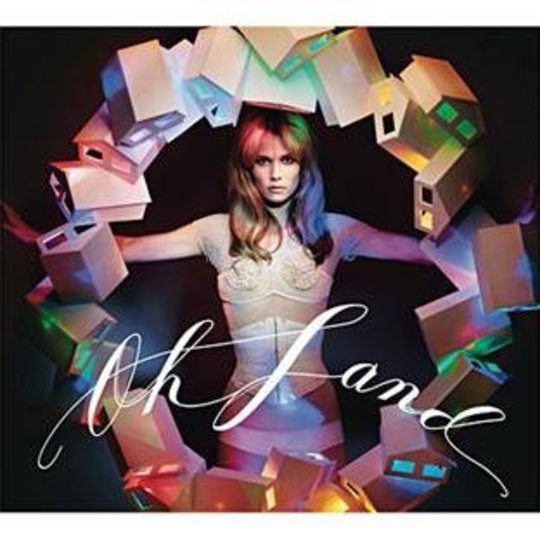 Despite the early promise displayed on introductory single 'Wolf & I', the second full-length from indie songstress Oh Land, is a decidedly middling affair. A massive deal in her native Denmark, while our Brit gals look to orchestral and retro styles to affect the appearance of substance, in the forward-thinking tradition of Scandi-pop Nanna Fabricius' stab at class and credibility involves balancing a platter of voguish electronic tropes, mostly of the post-dubstep ilk. The outcome is pop-cute but tastefully discerning: hip, diverse and always vibrant. It's also pretty forgettable.

Handling production duties, on the one side you have a Beyoncé veteran (Dave Mccracken). On the other – a former producer to Franz Ferdinand and Hot Chip (Dan Carey). So the stage is set for something perhaps glitzy but idiosyncratic. Oh Land, however, inhabits a tepid middle ground between the two extremes – offering neither gilded Scandi chart-pop (Robyn, Annie) or the artistic mettle of Scandi indie bands, most of whom are able to turn out sublime pop anyway. So you can see why the dearth of memorable tunes here is going to be a problem, when you're competing in the hit stakes with, not just accessible acts like P, B & John and Those Dancing Days, but also the mad-as-piss but inexplicably poppy likes of The Knife. It's especially troublesome if, consequently, Fabricius is to rely completely on her artistic statement, which on the whole lacks focus, gravitas and, most crucially, atmosphere.

Opener 'Perfection' is a clumsy take on Misery-era Blonde Redhead, with a laughably ill-judged middle eight and a rambling structure. It's followed by 'Break The Chain', its tokenistic dubstep bits and cheesy flamenco undertones, somewhat trivialising Fabricius' account of the day she was told she'd never dance again. 'Son of a Gun', meanwhile, is as dated as the album gets, sounding like something Rachel Stevens would've recorded while grinning inanely at a lame kitten, while 'Voodoo' sports the year's most irksome vocal hook - pivoting on “It's Voodoo You Do” (a pant-wetting giggle for the Reeves and Mortimer fans amongst you). 'Lean', meanwhile, begins all Portishead, before quickly dropping the pretence for an overwrought piano ballad, much in the Marina And The Diamonds mould. Elsewhere is 'Helicopter', which for all its skittish electronics and dubby beats is essentially a bland Feist track, whereas 'Human' copies from Bat For Lashes' 'Daniel' but reneges on its inspiration's tragic glamour in the rush to nail that house beat down. Then there's 'Rainbow,' which suggests she's picked up a few irritating habits from her 'kooky' Brooklynite neighbours (she moved last year).

The lady has her moments, mind. Some good 'uns. The super-catchy 'We Turn It Up' challenges 'Pumped Up Kicks' and Cults' 'Go Outside' for ebullient indie-pop gem of the year, while 'White Knights' fashions a touching ode to believing in your dreams via a mood-lifting beach carnival atmosphere. And suffice to say, 'Wolf & I' continues to dazzle. The Dane's choral swoon rising over bass hum and mechanical beats, she succumbs to her furry friend's terrible hunger by moonlight. Lonely and romantic, it's the type of erotic fairytale Flo Welsh would sell her kneecaps for. Unfortunately however, while the odd wolf injects a little intrigue, the sexy beast is but a sneaky diversion from an otherwise insipid album.