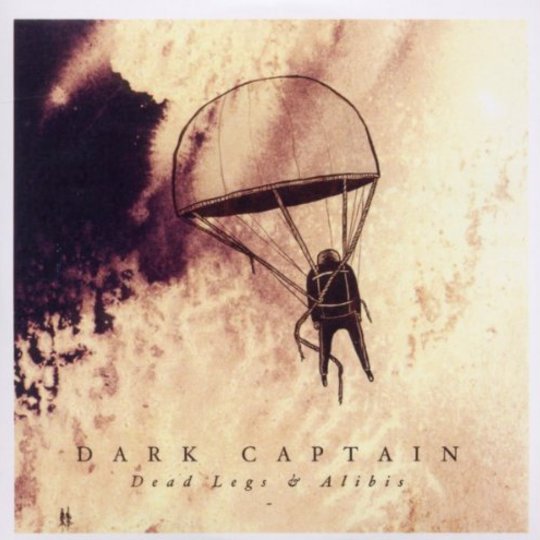 When debut album Miracle Kicker announced the arrival of Dark Captain (then clunkily named Dark Captain, Light Captain) to the world, it launched the band to the lofty heights of thirty-third on the Guardian’s top albums of 2008 - beating The Last Shadow Puppets, Ladyhawke and Justice. However, despite this praise, being a well reputed live act and ex-member Neil Kleiner's collaboration with Kieran Hebden, Dark Captain have always seemed to remain in the, erm, dark.

Regardless of that, they’re a committed band. Over the last few years, they’ve evolved from their original two man/one laptop live set-up to a more fully rounded five person set up, vocalist and guitarist Dan Carney still very much at their core.

Fast forward three years later to Dead Legs & Alibis and it’s apparent that such an evolution isn’t just rooted to their live act. ‘Fade’ is the closest in tone to the sullen Miracle Kicker – a limbo of tear dropping guitars dripping amongst languished Simon and Garfunkel like vocal harmonies. Don’t call them folk though. They might just kick your arse as we discovered when we spoke to them.

But drifting away from that dynamic, Dead Legs… is a much more upbeat effort. Themes of 1984-esque dystopian futures are offset by less chaotic narratives as Carney whispers: “On our paved road / You make your way / I will find you now” before a mish-mash of tribal drumbeats take over during ‘Long Distance Driver'. Meanwhilst the ‘Right Way Round’ nods to Madchester, its swaggering bass line closely matching the funky attitude of Ian Brown’s Golden Greats. There’s even moments during ‘3 Years to Go’ where the atmospheric haze of Massive Attack’s ‘Teardrop’ is invoked then transformed into a relaxing natural mist. Warming and ambient, it provides one of the most calming moments on the record.

Expanding into new territories, closing track ‘Flickering Light’ is Dead Legs…'s most captivating moment. Whilst bearing the melancholy of Miracle Kicker and isolated by the same dejectedness of Elliot Smith, an alluring guitar lead erupts from an unforeseen climax which would surprise even the most diehard Dark Captain fan.

It’s a shame that such an explosive moment arrives so late because, well, it makes everything else before sound a little tame. It begs the question: why didn’t such a moment appear more frequently? Then there’s the tiny niggle that the more upbeat tracks don’t quite hit the same spot as the otherwise sombre, Miracle Kicker type moments. Such points however, don’t stop Dead Legs & Alibis being Dark Captain’s strongest record to date.