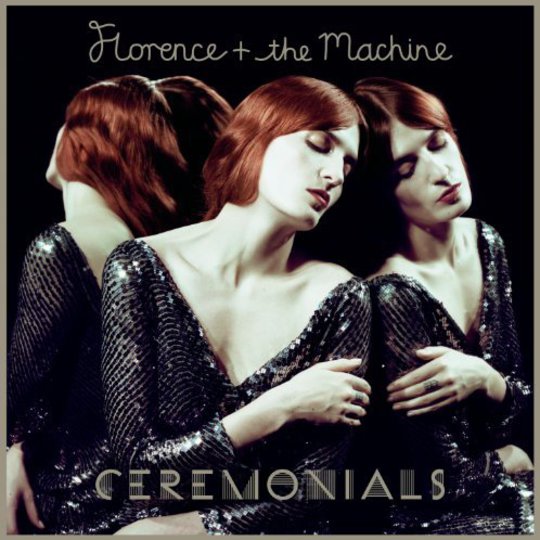 Florence + The Machine appear to have evolved into one of those bands that it is considered de rigueur for people who deem themselves musically leftfield and papercut cool to despise. This troubles me. Granted, Miss Welch’s live performances veer dangerously close to ear surgery at times and frankly, that cover of ‘You’ve Got The Love’ should have been drowned, disembowelled and fed piecemeal to small rodents at birth. But aside from that, debut album Lungs was an endearing, ramshackle and lovelorn collection of star-gazingly sorrowful songs which, (if you discounted the cynical grafting of aforementioned cover onto its bruised rump) held together with an oddly pretty coherence.

So I’ll be honest – I love that first record. And I can’t fully fathom the level of hatred thrown its way. She’s successful? It happens, get over it. You heard her on the Twilight soundtrack? In case you’ve forgotten, so were Radiohead. My suspicion is that as a person she sits a little too close to the Topshop identikit stereotypes who commandeer festivals with their Hunter wellies and overloud stories about being wrecked in some overpriced, toxic bar for many people. That may be so and is somewhat understandable by association, but it’s hardly her fault.

Nevertheless, as with the same music = cash formula that, back in 2004 caused Parlophone to issue a profit warning due to the late arrival of Coldplay’s X&Y, Island Records will no doubt be rubbing their hands with glee and anticipating Ceremonials plumping their coffers and bankrolling champagne and cigars at the Christmas party. And for Florence and company, this poses a question: do they go for the big commercial payday or focus on broadening their sound? There can be merit in either but in fact, they do neither. The main thematic change is that rather than being a child of the stars, Florence now sounds like a child of the Eighties, the songs doused in more synthesiser and Kate Bush-esque beats and pieces. But aside from that, this is the same old Florence we know well. And eventually, familiarity breeds a degree of contempt; no matter how colourful it may sound.

The record kicks out of the blocks with remarkable panache - the opening four tracks are wonderful. The kaleidoscopic waterfall and cathedral choir melodrama of opener ‘Only If For A Night’ is lushly and intelligently pieced together and new single ‘Shake It Out’ is brilliant: a truly glorious see-saw of dynamics: unrestrained rhythm and hysteria used to stunning effect. Preview track ‘What The Water Gave Me’ is full of understated brooding, maturity and solemnity and by the end of the superb ‘Never Let Me Go’, you could easily be forgiven for thinking that you are listening to one of the most unexpected surprises of 2011, so strong and resonant is the roar of the opening salvo.

But just when you think that Ceremonials is about to become something special, it nosedives with the miscalculated folly of ‘Breaking Down’ - a featherweight, aurally ugly track that screams 'filler' with every note. And from that point through the flaccid midriff of the record, Ceremonials coasts with a sluggish, predetermined cruise control. Good as the band are and as delectable as Paul Epworth's production sounds, they are too content to rest on their sound and trademarks – rumbling toms, swishing chimes, plucked harps like heartstrings and Welch attempting to oscillate for Great Britain – without ever exploring the deeper recesses. ‘Lover to Lover’ tries to ride a Motown bicycle but quickly overbalances and shrugs in confusion. ‘Seven Devils’ has a promising initial premise but simply can’t sustain interest over five increasingly tedious minutes. And as the record progresses, the triumph of the opening four tracks eventually returns to haunt the record as it gradually pales in comparison, on more than one occasion moving disconcertingly close to the formless, vacuum-packed hysteria that detractors often level at them.

Things do come to a belatedly welcome conclusion with the closing three songs, where the band pull out of their slumbers and kick for home. ‘Spectrum’ has a fantastic house-beat kick that puts a fire under the chorus and crowns itself as the most likely to take over daytime radio playlists. ‘All This And Heaven Too’ carries an endearing Stock/Aitken/Waterman simplicity and closing track ‘Leave My Body’ oddly recalls Like A Prayer era Madonna channelling Peter Gabriel (this is a good thing). And so the album resolves in three sections: a stunning win at the first, an abject defeat with the second and a hard-fought draw to conclude proceedings.

So what does Ceremonials tell us about Florence + The Machine that we didn’t already know? In truth, very little. They remain mysteriously at odds with most of the mainstream and they are still capable of stunning moments of beauty. But for all that is good about the record, there are too many examples of simply turning up the emotional thermostat to cover for a lack of natural warmth from the songs themselves.

As a second album, it is perfectly acceptable and there are many aspects of it to admire. But the static present on much of Ceremonials cannot quantify the record as anything but a regression in broader terms. And though it remains pleasurable to hear a mainstream act taking a leftfield approach to modern indie-pop, they’ll have to work a lot harder if they want to someday win over their doubters.