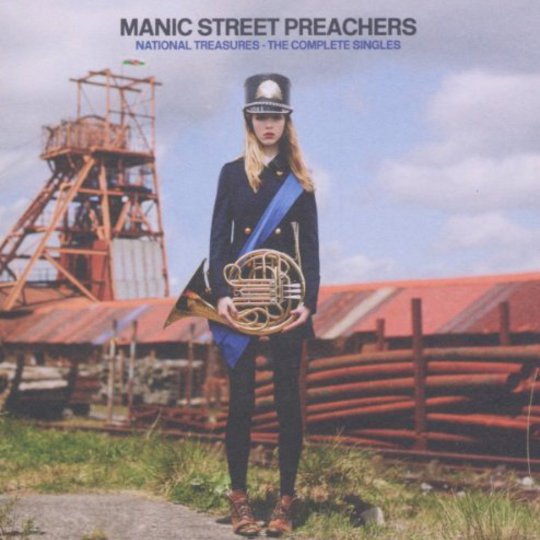 It barely needs saying that the Manic Street Preachers are a band who have always striven for importance. They were never a band for whom it was “...all about the music, man”. When you hear Nicky Wire bemoan the lack of bands with the “inspiration of The Smiths or The Sex Pistols” and bands “...who you want to look like and you want the haircut, you actually believe what they're saying” it's pretty clear that, as far as he's concerned, the Manics are, or at very least were, in that number. Indeed, regardless of how high or low a position in the rock pantheon you bestow upon the Welshmen, there's no doubting the devotion and emotional investment that people feel towards them; the image, the slogans, the politics, the audacious ambition, the loaded gun of literary and pop culture allusions all channelled through the classic last-gang-in-town dynamic of the four piece rock band that they'll never let us forget they once were. As you'd expect of those who hold the Sex Pistols in high esteem, the pop single was yet another weapon in their armoury. Yet the single that eventually got them to No.1 was a decidedly un-pop acoustic lament about the Spanish Civil War entitled 'If You Tolerate This Your Children Will Be Next'.

Their last greatest hits package, 2002's Forever Delayed, was an abomination that would have you believe that 'Tsunami' was more of a quintessential Manics song than 'Stay Beautiful'. The subsequent b-sides and rarities compilation Lipstick Traces: A Secret History of Manic Street Preachers felt like an apology. Nine years after Forever Delayed, the Manics are celebrating the twenty-first anniversary of the release of their first proper single 'Motown Junk' by releasing a definitive collection of all 37 of their singles to date (plus a new cover of The The's 'This Is the Day'). Perhaps by letting history dictate the tracklisting, Wire and comrades Bradfield and Moore are hoping to avoid rewriting their musical history this time round. Quite how definitive National Treasures is depends upon which version you have. If you feel like splashing out £165.00 there's a deluxe CD boxset featuring the b-sides for each single as well as 7-inch vinyl copies of 'New Art Riot' and 'Suicide Alley'. For the majority, National Treasures will take the form of a double album featuring all A-sides in chronological order, which is fair enough really, except for the omission of 'P.C.P', the Holy Bible's searing closer, released as a double A-side of 'Faster'.

So, why do we need a singles compilation from the Manics? Well, as you would expect, all the singles have been remastered, but some seem to have benefited more from these efforts than others. Of the Generation Terrorists inclusions, 'Stay Beautiful' and 'Little Baby Nothing' benefit from greater stereo separation, particularly James Dean Bradfield's lead guitar and the duetting cries of “culture, alienation, boredom and despair” on the latter song's stirring coda. On other hand, 'You Love Us' is still a great antagonistic anthem let down by an overly compressed sound. Generally the remastering job makes little audible difference, probably because the Manics' back catalogue is pretty well produced as it is. Let's be thankful that they don't meddle with the twisted and taut metallic textures of The Holy Bible.

A reworking of The The's 'This Is the Day' in the style of Postcards From a Young Man is pleasant enough, but hardly much incentive for purchasing a load of songs you already own. Such considerations aside, by presenting to us the Manics' compelling history (albeit an incomplete one) listening to National Treasures in order is still a hugely satisfying and engaging experience. The first disc is somewhat dominated by Generation Terrorists with its six singles. The weakest of these, the extremely G N' R-indebted 'Slash 'n' Burn', now sounds somewhat comical to these ears, but it's undeniably infectious all the same. The same goes for the soft-metal cover of 'Song from MAS*H (Suicide Is Painless)', but the greatest joy is in hearing how poignant 'Motorcycle Emptiness' sounds whilst bearing the same influences as its more confrontational neighbours. The same goes for 'From Despair To Where' and 'La Tristesse Durera (Scream to a Sigh)' which are more indicative of the depth of Richey Edwards' lyrics than the GT singles. 'Faster' and 'Revol' sound incongruous outwith the context of their parent album and the decision to release 'She Is Suffering' as a single still baffles, although the contrast between it and the still breathtaking post-Richey comeback of 'A Design For Life' emphasises the end of Manics Mk.I and the beginning of Manics Mk.II beautifully.

In comparison, disc two naturally suffers from a dip in quality, but is still almost as compelling. Heard next to their most recent offerings, This Is My Truth..., singles 'The Everlasting' and 'Tsunami' stand up as Nicky Wire's lyrical high-points along (alongside 'If You Tolerate This...' and 'A Design For Life') and offer a musical subtlety that some unfairly criticise as being dull. Compared to the overly self-referential pomp-rock of 'Autumnsong', 'Indian Summer' and 'Postcards From a Young Man', the grittier rockers 'Masses Against the Classes' and 'Found That Soul' actually succeed in recapturing some youthful ferocity whilst the underrated 'Let Robeson Sing' wears its heart and politics on its sleeve in stirring fashion . Also underrated are the very different pop experiments of 'So Why So Sad' and 'The Love of Richard Nixon', the latter a typically contrary move. Although their parent albums were overblown attempts to invoke their glory days, both 'Your Love Alone Is Not Enough' and '(It's Not War) Just the End of Love' are fantastic pop songs where the melodies more than justify their sugary production.

Apart from the fact that it contains some pretty brilliant and monumental songs by one of the most important British bands of the past two decades, perhaps the greatest virtue of National Treasures is that it doesn't whitewash the story of the Manic Street Preachers one way or the other. Except for the natural absence of Journal For Plague Lovers we get at least an essence of what is that makes the Manics special. Thus, National Treasures is thrilling, bland, bold, audacious, safe, ferocious, tame, overblown, rousing, accessible, difficult etc. In other words it's a glorious mess of contradictions and what could say 'Manic Street Preachers' more than that?