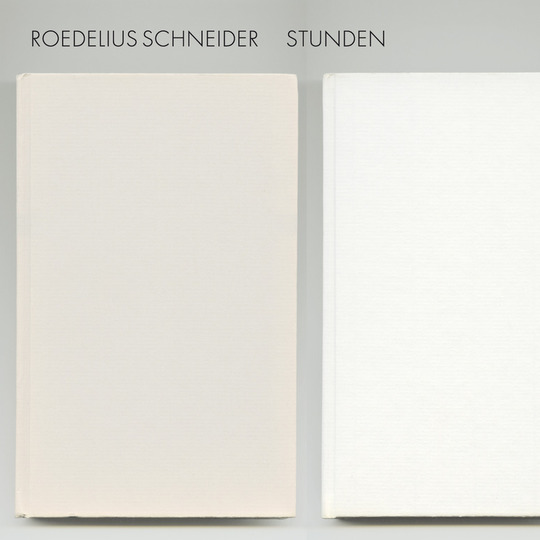 A mere slip of a thing on first listen, Roedelius Schneider's Stunden soon reveals itself to be as complex a transmission as might be expected from two masters of electronic music. Recorded over the course of a year, this minimal gem emerged from Hans-Joachim Roedelius and Stefan Schneider’s decision to form an unlikely alliance between piano and synth – and to follow just one rule when collaborating: that their album would be, above all things, quiet.

Luckily, quiet isn't much of a stretch for either of them. Roedelius, now 76, is a Krautrock legend – he co-founded the Zodiak Free Arts Lab in late Sixties West Berlin, a seminal venue for early kosmische experimenters, playing host to bands like Tangerine Dream, Ash Ra Tempel, and Cluster - his own pioneering space-rock unit. Over the decades, both with Dieter Moebius in Cluster and in his solo work, Roedelius’ output has shifted from amplified, atonal theatrics to electronic serenity – he's been riding the ambient tip for a long time now. To Rococo Rot bassist and synth wizard Stefan Schneider also knows this territory well; even if his To Rococo Rot work sometimes veers towards post-rock, his solo work as Mapstation and collaborations with pianist Bill Wells prove that he's equally at home making the mellowest of music, too.

All 12 brief songs in Stunden arrange themselves around Roedelius' piano and Schneider's digital and analog synths, guitar and zither. An album as purposefully ambient and amorphous as this shouldn't lend itself to being schematised in any way, but it does, with every song falling neatly on a spectrum from tranquil to portentous. Even in the latter, though, the musicians steer clear of anything genuinely punishing – Stunden's underlying controls are set to relax mode – more than anything, it's music for unwinding and spacing out to.

The songs on the serene end of things are beautiful; ‘Geschichte’ (which means ‘history’ – brilliant, my German GCSE has finally come in useful) is a tiny tranquil bubble; you could close your eyes and imagine yourself in a Japanese garden while listening – but do so quickly, because it only lasts a minute and a half. ‘Liebe’ (er, I'm not gonna translate that) is an amble around a single piano line so soothing that it soon becomes meditative; and ‘Land’, the album's closer, finds the collaborators shedding the need for much at all besides gentle meandering static and a few mesmeric piano plinks.

Meanwhile, ‘Single Boogie’ is about as pretty as you can get; Roedelius' gentle piano a benign complement to Schneider's persistent synth pulse. The way it binds weightless melodies together with a deep electronic drift is the album’s best example of the beauty these two are capable of concocting. On the other hand, ‘Miniatur,’ which plays around in the higher octaves, is unsatisfying; reminiscent of a tinny music box melody – and the only misstep on the album.

On the other end of the spectrum, the minute-long ‘Das Eine’ feels like a strange echo of the ominous soundscapes of Cluster 71, but unlike that 40-year-old gorgeous headfuck of an album, there's no sense of being thrown out into deep space here. Because both Stunden's darker and brighter elements are contained within that central idea of quiet, all its tracks are calm and ordered – even the moodier ones like ‘Das Eine’, and the wilder ones too, like ‘Zug,’ with its bright, relentless piano loop gradually sublimated under a succession of lulling drones.

The central triptych of songs, ‘Stunden I’, ‘II’ and ‘III’, prove that for Roedelius and Schneider, the distance between melancholy and serenity is shorter than you might think. They map a path from austerity to softness via distortion, repetition and expansion. ‘Stunden’ means ‘hours’ (yeah, I know, I'm showing off now), and it's a title that makes sense – track by track or taken all together, this album isn't the sort of stuff to be consumed in a rush. You could indeed listen to it, hearing new piano trails or electronic undertows each time, for hours.