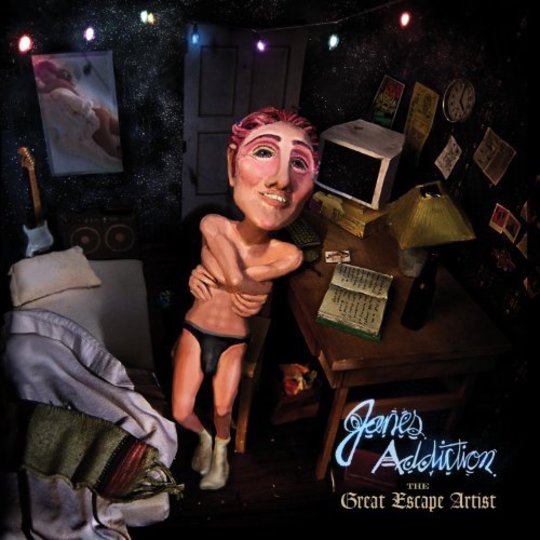 Let’s get this out of the way early on: ultimately, Jane’s Addiction are a band still living off the outrageously high quality of their early releases. And here, early means 20 years ago. While 2003’s Strays demonstrated that these guys could still play loud rock music in their late thirties-forties, it didn’t really prove much else. So here we are, a few more bassists down the line (original bass player Eric Avery, TV on the Radio’s Dave Sitek, Duff “Guns N’ Roses” McKagan and now back to session whiz Chris Chaney), several, let’s face it, nostalgia-fuelled tours to pay the bills and, now, the band’s fourth studio album proper. Indeed, at this stage of the game, nothing could be more shocking (ahem) than a twenty-first-century success story from the LA troubadours.

Fortunately, initial impressions are good: producer Rich Costey has done a superb job here, expertly balancing the spaced-out with the rock-out, while the presence of Dave Sitek on the album’s opening tracks lends a dark, dirty groove which brings a much-needed sense of vitality to a band who have, up to now, primarily been performing decades-old material. A few instrumental and lyrical cues also seem to have been taken from old pal Trent Reznor as tracks like ‘End to the Lies’ and ‘Curiosity Kills’ possess the same destructive swagger as With Teeth-era Nine Inch Nails. Further to this end, guitar lothario Dave Navarro largely eschews his usual overexuberant soloing, instead taking a backseat in order to fully embrace electronic aspects; ‘Twisted Tales’, in particular, furthers Jane’s desire, or perhaps need, to push themselves into relatively new sonic territories, but thankfully avoiding the "Muse and Radiohead" comparisons which frontman Perry Farrell had previously predicted.

Of course, all these new-fangled technological advances mean nothing if the songwriting isn’t up to standard. In this regard, The Great Escape Artist is highly reminiscent of Strays in that it steadfastly sticks to one particular vibe which wears thin by the album’s close. ‘Underground’ is an undeniably colossal opener but once we reach ‘Ultimate Reason’s, by now tired, bass-heavy antics and Farrell’s overextended plant metaphor and dubious gender stereotyping ("you’ve got to treat her like a flower man / women need time to recover") in ‘Splash a Little Water on It’, ear fatigue begins to set in and attention wanders. In particular, the album’s closing tracks are both odd choices as ‘Broken People’s melancholy potential is soon shot down by an over-cooked full-band presence, while ‘Words Right Out of My Mouth’ is a nod to the past, but it’s one that requires far too much effort to appear natural.

Although the production goes some way to recapturing the atmosphere of the band’s early work, it can’t mask the fact that these compositions still don’t encompass the same daring inventiveness which this group of musicians once held so dear; like Strays, this is fairly middle-of-the-road material, this time dressed up with the odd synth here and there. Bands often say that there’s no point in rehashing the past, but if you cannot match it in terms of composition or artistic credibility, it becomes extremely difficult to forget it. Get past the fact that it was made by the same band who once spearheaded the Nineties alt. rock scene and The Great Escape Artist is a solid enough rock record. However, considering the lead-up to Jane’s latest release, this is a somewhat underwhelming effort, once again pushing any idea of recapturing that lost magic even further towards the back of their cabinet of curiosities.