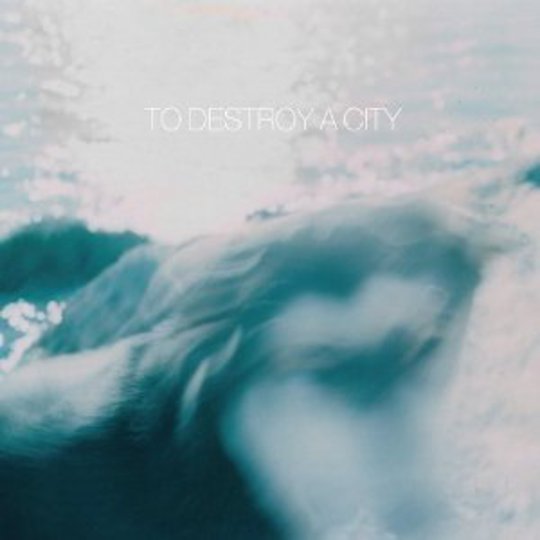 A songwriter undergoing 'earth-shaking personal events' can either a) do a Mose Allison (shoot wife, transform event into hit jingle) or b) team up with two dear friends and thrash out the fastest post-rock album in history. To Destroy A City chose b) when something terrible happened to them last year - not quite ready to apply for gun licences/all get Mohicans, they instead set out to cross-pollinate electronica and Explosions In The Sky-style rock hymns. With n5MD providing funding and guidance - home to Lights Out Asia and Port Royal, who’ve done similar cross-pollinations in the past - To Destroy A City is exactly what you’d expect from three skilled and bereaved multi-instrumentalists: beatific synths, guitar haikus, long shambling build-ups and enough hold-everything moments to make you think: 'Wow. Let’s take up meditating.'

The hold-everything moments - those instances when you’re on shuffle, have to stop, tap your MP3 player and see what it was that just grabbed you - are what makes To Destroy A City such an engaging if sadly formulaic album. At 41 instrumental minutes there are a lot of whinnying emotions to plough through, and many listeners are likely to give up once the sea noises and guitar pedals start on ‘Metaphor’. 'Two-thousand-and-three was that way,' will be the default response of hovering producers, wary of the cinematic slo-mo which could be better used for kissing film stars. Luckily n5MD have faith in their trio, and once the fuse has been lit the gloom soon gives way to rocket fuel. Regrettably, it takes five tracks to ignite: ‘The Marvels of Modern Civilization’ gathers keyboards, a trance beat and stops just short of being the Terminator theme, the band adding a bucket of classic lasers to sound like a deleted scene from Drive. If that wasn’t Eighties enough for you, ‘Before The Outside’s Gone’ merges Cocteau Twins guitar with a runaway telegraph readout, then adds swathes of ambience care of one of the players/programmers. His Eno flourishes are just introspective enough, building to a flinch at 3’40” when someone switches on the bass.

If the emotions ran this slickly throughout the entire record, To Destroy A City would be a guaranteed sleeper. Unfortunately, its ambition is a little weighed with duds, making you wonder if eight tracks isn’t perhaps two tracks too many (allegedly five of them came straight off the bat when the Bad Thing happened last year). ‘Ilium’ shows off the record’s only vocal; a Lee Marvin impersonator reading T.S. Elliot quotes where ”Between the idea and the reality / Between the motion and the act” sounds like Fry & Laurie’s bonkers perfume ad. ‘Goodbye, Dear Friend’ is sadly as risible as its title, so desperate to recreate Chariots of Fire you can feel the band stripping down to vest and pants. It even repeats the trick from ‘Before The Outside’s Gone’ of using bass to spice up its second half... Could the cross-pollinators be running low on fertile flowers?

Overall, no, and by anyone’s standards To Destroy A City is a rich, accessible debut. Considering most of this record was written and recorded in under 12 months - as opposed to the lifetime most starters-out get - Andrew Welch, Jeff Anderson and Michael Marshall can each light up a cigar. The knowledge they’re from Chicago comes as an added shock, too: surely men this capable of fusing white noise and melody must all hail from Iceland. And though a lot of the record could double as Christmas market music (expect to hear ‘Narcotic Sea’ everywhere in Chicago anytime after Halloween), there are enough dustbowl guitars/rousing passages/John Murphy moments to show TDAC are a band with scope - and they won’t dare rest until they’ve connected with everyone, one way or another. Got a crush that’s being terminally ignored? The buildups/payoffs here will floor you. Looking for music in a party political broadcast that shows the country is working? The choruses here are tailor-made, and are lot cheaper to licence than Coldplay.