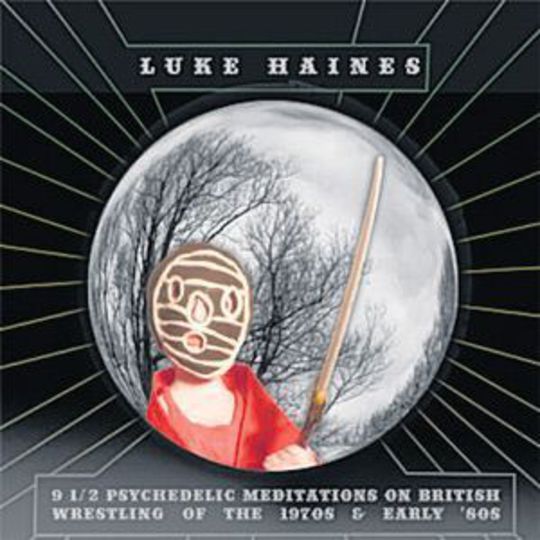 “Has Luke Haines lost his mind?” asks the press release. “Yes”, it declares proudly. He has recorded Nine and a Half Psychedelic Meditations on British Wrestling of the 1970s and early ‘80s.

This is not the first atypical move in Haines’ career. His memoirs chart the combination of bad luck and wilfully uncommercial artistic choices that have led to his failure to convince the world of his talent: The Auteurs losing the Mercury to Suede by one vote and then being eclipsed by the derivative boorishness of Britpop, songs about child murder recorded by Steve Albini, side-projects inspired by Seventies terrorism, Haines breaking both his legs by jumping off a 15-foot wall to avoid touring…

As Allan Jones pointed out in his book review of Post-Everything for Uncut, Haines is not exactly the struggling outsider he purports to be. He’s a bit like the comedian Stewart Lee in that respect; doing pretty well despite his unusual creative decisions and general obstreperousness, constructing and manipulating the character of the downtrodden underdog to comfortable commercial advantage, keen to emphasise his intelligence and integrity in comparison to others in his profession, and now with a parallel career as a published author.

Far from being written for fans of sports-based concept albums whose thirsts weren’t entirely quenched by Neil Hannon’s Duckworth Lewis Method, it’s almost as if Haines has conceived this project in order to have something to write about in his next book: “In 2011 I am bold enough to release a concept album about wrestling. The rest of the world inexplicably continues to rate Elbow. My record is an unparalleled work of genius. Only I notice this of course.”

The first thing that makes an impression is the humour. “Count Bartelli is unmasked, The Zebra Kid is unmasked, The Red Scorpion is unmasked,” he sings, again mirroring Stewart Lee’s fondness for repetitive lists leading to an underwhelming yet simultaneously amusing conclusion: “Gorgeous George didn’t need a mask.” Elsewhere the mirth derives from mixing drama with the mundane: “First we take Berlin, then we take… Stoke” (sorry Stoke), or in the simpler glee of imagining Big Daddy jamming with a Casio keyboard.

This is not a comedy album, however. It is a very personal project, inspired by a childhood enthusiasm for the sport and by watching wrestling with his father. The first lines “I was trying my best to understand / How a beautiful bouncing baby becomes an ‘orrible man / As a child I thought I’d grow up to become a dancer / But I became a fighter”, could apply as much to Haines as to any wrestler, and also evoke universal feelings of lost youth and innocence. As well as Haines’ own past, it is also about history in a larger sense; he is analysing a version of Britain that no longer exists.

The other big theme is food. This is a world of greasy spoons, egg and chips, bangers and mash, and baked beans (Les Kellett supplemented the earnings he made in the wrestling ring by working in a transport café in Bradford). “Egg and chips from the transport caff was the worst food that I’d ever had / ‘Do you want some more?’ / Oh dear God no”; this is a nostalgic album but the greasy food, the patently absurd sport, and Haines’ ambivalent wryness make it unclear whether he is mourning or ridiculing the past. It is a sort of nostalgia for the grotesque.

‘Psychedelic’ is misleading. There are nods to Sixties and Seventies prog-folk and the odd tongue-in-cheek spoken word passage, but the sound is still distinctly Haines. Some might have hoped for his whispery vocals to have deepened or strengthened by now, but the short running length prevents this (and the concept) from grinding. On some tracks it works very well. His breathy delivery of the line “Mother what’s for tea? / Liver, sausage sandwich, and cheese” manages to sound extraordinarily sinister.

Instead of jumping on board the reformation circuit like many of his Nineties contemporaries, Haines has released a concept album about British wrestling. Haines is not mad. He is an artist in the truest sense, and for that he is to be applauded.