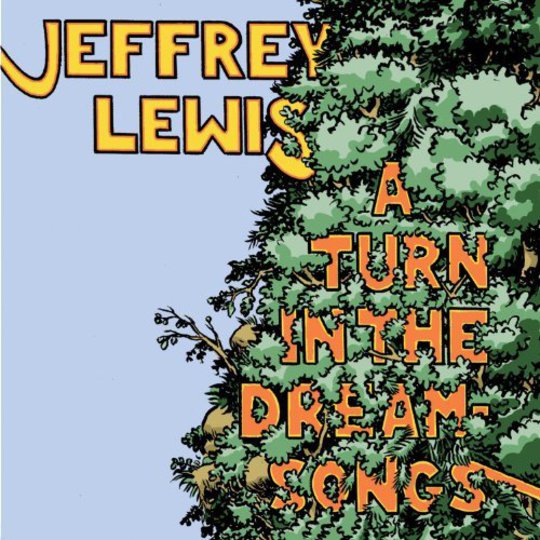 Jeffrey Lewis is a clever enough man to treat any testament to his originality as an accusation against his self-awareness – he is an artist who goes to great lengths to disguise himself as an artisan.

He references influences in song-titles (‘Williamsburg Will Oldham Horror’, ‘History of the Fall’), records whole albums of hagiography (12 Crass Songs ) and has even written a series of New York Times articles about his knowing appropriation of influence ('perhaps what I do should be called song-composting, or song-mulching').

The effect of this process is two-fold. On the one hand, it suggests a welcome modesty, and on the other, a hyper-consciousness that occasionally overburdens his songs with intelligence whilst at the same time stripping them of meaning.

A Turn in Dream-Songs bears this out – from one song to the next it highlights both Lewis' frequent brilliance as a songwriter and his equally frequent propensity to undo his good work by lodging his tongue so firmly in his cheek that genuine communication is reduced to mumbled soliloquy.

'I Got Lost' speaks for the defence. The song bounces along, all flat-strum and anti-folk shuffle, while Lewis sing-speaks over the top – rarely daring to move beyond the two or three notes he has made do with for a decade or more. The writing is wonderful, a handful of rhyming couplets subtly spun and twisted, alternating emphases and pronouns, examining a single idea from multiple vantage points. It works because Lewis has the creative authority to reshape the semantic drive of a line with effortless precision – it is moving because he knows that any phrase repeated often enough starts to take on the intonation of a desperate prayer. The song is a perfect example of the rare alchemy that Lewis is capable of; transforming a simple utterance into something deeply resonant.

Similar praise befits 'Water Leaking, Water Moving', the strongest track on the record. In many ways the song is reminiscent of Daniel Johnston's 'Running Water' in its hypnotic and disbelieving response to the machinations of H2O. However, there is a significant distinction between the two approaches. Johnston's song pivots just on the edge of saying something – an innocent and suggestive nursery rhyme. 'Water Leaking, Water Moving' has all of the staples of a Jeffrey Lewis song – humour, intelligence and insight, in addition though, it possesses a far scarcer commodity; genuine emotional substance.

'When You're By Yourself' contains a moment that exemplifies exactly why Lewis is held in such high esteem as a songwriter. After listing, fairly prosaically, the culinary perils of singledom (cooking for oneself, shopping for one, etc), the character of the song is left sitting alone in a restaurant, with his backpack and coat occupying the chair opposite. If you were to end the song here, it would stand alone as a poignant vignette. Lewis, however, mines deeper than most writers.

The character decides he needs the toilet, and resolves that in order to ensure his belongings are safe, he must take them to the toilet with him. As he picks up his backpack and coat, the waitress reacts as though he is leaving without paying his bill and forces him to explain himself. It is a brilliant piece of songwriting – supremely well-observed, very funny and, in the end, crushingly sad.

There are times though, when the record slips into a degree of smug self-reference that leaves you wishing that Lewis would spend less time considering what it means to be a songwriter, and more time just being one. 'Cult Boyfriend' is a case-in-point, the song draws a tenuous analogy between a romantically unsuccessful man (groan) and an underground musician with only a handful of rabid fans (groan) – an existence defined by the twin perils of scarcity and intensity.

Harmless enough? Sort of... but when the final lyric suggests that the song itself will probably not be heard by more than a few people at an open mic night, it is difficult not to cringe a little bit. Or a lot.

(People like your records Jeff, in some cases a lot, the open-mic days are over...)

And herein lies the problem, for all his self-awareness, Jeffrey Lewis is at his best when he is simply writing songs. When he slips into the precocious, self-depreciating, in-joke raconteur, he is doing himself a profound disservice. Originality is a complex issue, of course, and so is influence, but we already knew that – we don’t need Jeffrey Lewis to explore the issue on our behalf. The humiliation of being forced to take your backpack into a restaurant toilet, however, is far more interesting, and something I doubt many songwriters would have had the insight, talent – or 'originality' – to explore.