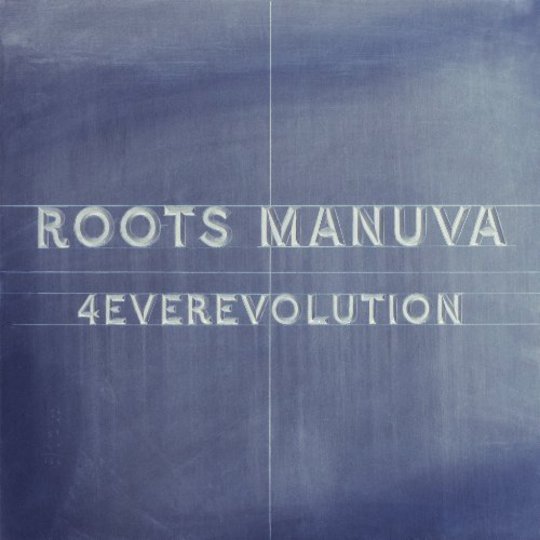 Somewhere amidst all the bling-groping and macho bravado of the hip-hop world exists Rodney Hylton Smith, better known as Roots Manuva. The London-born cult icon has over the past decade established himself as a soothing antidote to his transatlantic peers, his bruising lyricism infused with a wit, conscience and Proustian turmoil unbeknown to the rap game’s domineers. Now fast approaching 40-years-old, Smith shows little sign of a mid-life crisis on new album, 4everevolution. In fact, it’s perhaps his most assured and compelling listen to date.

This new release, his fifth studio effort, is nothing if not timely, arriving as the noise and cacophony of the recent UK riots begins to fade into the ether. As ever, Smith is uncompromising in his dissection of what he terms “Insanity Britain”. ‘Skid Valley’, an early-album blast of strings and crunched urban beats, sees his svelte rhymes echo in the rather grim newspaper images of late: “low pay packets and high inflation / and now you wanna blame us for the end of the nation”. This lies atop of a delightfully nuanced musical backdrop, one of sauntering hip-hop grooves, contemporary reggae flourishes and big-hitting pop melodies undercut by a strange and rather topical sense of unrest. In short, it’s a thrillingly dark ride.

It’s not all doom and gloom though. Smith’s sardonic takes on trivial parts of British life are amongst the album’s most brilliant moments, indicative of a wordsmith with a rare talent, able to swing from serious to satire at leisure. How many others could pen a sneering critique of our collective fetish for plush electronics, wrapping it up in a Jamaican dancehall meets London basement rave love song? “I writ this song for my boo / she never seems to get confused” serenades Smith on ‘Much Too Plush’, “she’s a quality item, she don’t do spam / all I need to give her is two gig of RAM”.

Clocking in at just under an hour, it’s quite a dense record to sit through. But such is its languid flow and unrelenting rhythm that you hardly notice the 17 tracks fly by. Just as the separate words in its title all slide into one amorphous blob of meaning, the songs on 4everevolutuion seem to collapse into one another, maintaining a musical narrative that races by. The centrepiece of the album, an ethereal calypso-pop jam called ‘Wha’ Mek,’ flashes past, offering a jovial respite from the grimey aural snaps and crackles lacing the rest of the album. There’s also a welcome appearance by Toddla T on the club floor-friendly ‘Watch Me Dance’ as the album tumbles forward with a fierce momentum all the way up to its thumping finale, ‘Banana Skank’. Intense, cutting and clever, this is an album that unfolds at a near blistering pace. Roots Manuva just keeps on delivering - here’s to another decade.