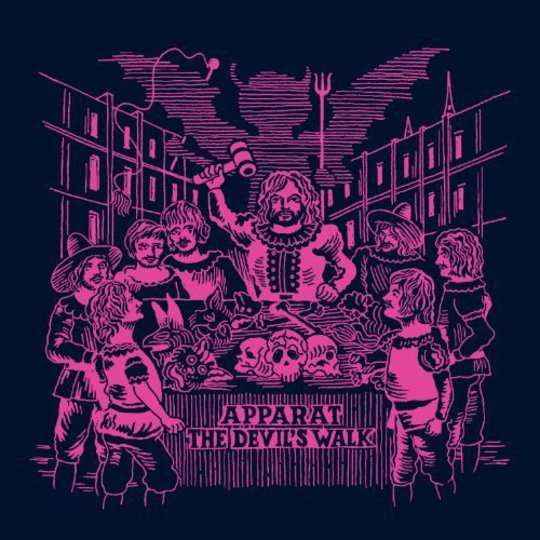 In music terms, walking with the devil is just another name for selling out. What does the devil want from you as you walk hand-in-hand, negotiating quick and safe passage to the fiery underworld? He wants you to accept that success can only be measured by the accumulation of personal fortune. He wants you to capitulate to the lure of pretty much everything beyond the parenthesis of simple artistic integrity. That is the cross all artists must bear. That is the temptation they must resist until their final sonic breath. And if Tony Wilson were more than a merely self-proclaimed music deity, that is the contract they would sign in blood. The Devil's Walk. On the face of it, there could not be a better title for the new record by Sascha Ring, aka Apparat.

It's highly unlikely that Sascha Ring, the prodigiously talented German producer behind the moniker, intended it quite this way. He could always claim things got lost in translation. But it has to be more than just sheer coincidence that pairs Apparat's most obvious attempt to court the mainstream (and make a buck, or two) with a seemingly willing pact with the enemy. And while this all might seem a little (or a lot) like hyperbolic criticism, to the well-educated ear the transition from the far more creatively-engaging unpredictability of Walls to the slightly archetypal quasi-anthemic homogeneity of The Devil's Walk couldn't be any starker. It'll totally divide opinion, of course. Plenty will clasp this record to their bosom. Despite its heavier tone, it is more approachable, more melodic. It'll chime more with the now-standard weekend emotions of euphoria, comedown, love/lust and inexplicable loss we all feel at regular or irregular intervals, depending on your thirst for whatever poison gets you through. And make no mistake about it: The Devil's Walk can be as persuasive and intoxicating as you want it to be. The acute complexity of temptation inevitably boils down to a simple yes or no. You'll take to this record or you won't. Making that decision, however, may take a little time.

What is immediately clear is that Apparat has now fully jumped the divide he was straddling with his previous material. At times, he leaps so far as to be in Snow Patrol territory. 'Escape' is the clearest example of how far he has travelled since the twitchy, beatsy glitch techno of Duplex. Orienting itself around scratchy-eyed, mid-comedown Sunday morning moods, major to minor piano chords, elegiac strings and Ring murmuring stuff about "_horizons_" and "_soft hands_", it's the kind of pop music that would prefer not to be classed as pop. And it's commonly beautific enough to appeal to TV advertisers, the world over. 'The Soft Voices Die' offers a similar pitch. Sigur Rós-light and production-heavy, it's too obviously imbued with what it desperately wants to be to offer up anything new. But this is Apparat (!?), you're saying. This is the guy that could drop your jaw with a Casiotone. Well, turn to the dark side and this is what happens.

Apparat diehards will argue that it's the album's (literally) darker aesthetic that propagates such a change of musical tack and allows for greater stylistic harmony. And that is partly correct. The Devil's Walk is certainly more streamlined, musically, and much more focused, thematically, than either Walls or Duplex. And in that sense, this is definitely a record that can be pushed to a certain market (clubbers), to perform a certain function (coming off drugs). But by limiting himself to one place, one mood and one texture - especially one that has already been covered ad nauseam within the IDM genre - Ring walks head first into cliché and self-parody.

Of course, the counter-argument to all this typically snobbish critique is equally valid. Even more so when you're Sascha Ring. This could very well be a record that catapults Apparat and places him in the company of other big-leaguers such as Ti?sto, Paul Van Dyk, Sasha etc - all hugely successful and, one imagines, hugely wealthy electronic music artists, in their own right. It bears all the necessary crossover qualities and will instantly appeal to more people than Walls ever could. So who's really laughing loudest here? And though The Devil's Walk isn't strictly a DJ/club album, it'd be greedily lapped up as a club-based live show. And, it should definitely be noted, there is obvious quality here. The Devil's... strongest cards are all largely quasi-euphoric paeans to ecstasy's often rather forlorn flipside. 'Song Of Los' pulls happier reflections from the chemical fog. The beautiful 'Goodbye' is Fever Ray-like in its metronomic post-everything gloom. The Timbaland, hip-hop beats of 'Candil De La Calle' are a welcome respite from the rest of the album's more conventional IDM constructs. Highlight 'Ash Black Veil' drives, ascends and scatters sonic effects like speed-addled, adrenalin-doused streams of post-weekend consciousness. It has to be said, there are worse records to rely on on a particularly fragile Sunday morning.

But still the question remains. Did he really dance with the devil? Just like temptation, it all boils down to a simple yes or no.