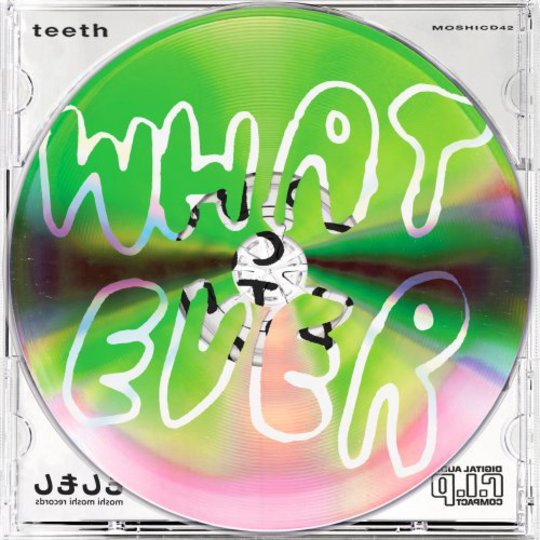 WHATEVER is an odd one. A sticky, garish mess of an album, it skirts a fine line between raucous, fun electro and an unholy disaster. I could never decide if, while listening, I wanted to break out the vodka or have a paracetamol, a glass of water and a lie-down. At first, I hated it (shamefully, I must admit I was looking forward to writing a thoroughly scathing review). Having spent more time with the record, I can see the charm. That, married to a brazen attitude that just about avoids obnoxiousness, equals success of sorts.

TEETH have been likened to Yeah Yeah Yeahs in some quarters, a comparison that doesn’t sit right with me. For all the intermittently thrilling noise, this album has very little of the visceral power or emotional heft of YYY's finest moments.

However, while the music of TEETH may lack depth, it certainly isn’t, er, toothless. This is a half-hour slab of solid, aggressive electro, with all the subtlety of a sledgehammer to the face. TEETH employ a kitchen-sink approach, and luckily for them enough sticks to create actual music, rather than the endless abyss of squealing electronics WHATEVER occasionally threatens to collapse into.

Thankfully, it just about stays on the rails. Indeed, at its best WHATEVER is elevated from rickety, flashy sugar rush to something altogether greater and more controlled. New single ‘Flowers’ in particular is a highlight, a taut, rumbling piece of pop, its hypnotic chorus of “dream on, dream on, dream on” trilling in tandem with the rippling synth line. Third track ‘Care Bear’ is a barely controlled deluge of sound, infectiously enthusiastic, while closer ‘Street Jams’ is a vaguely Fuck Buttons-esque wall of pounding noise.

So it’s catchy and fun, and it demands to be played at high volume. Yet this is undeniably a pretty disposable album. The kind of record you can’t get enough of for a couple of weeks, but come December you’ll have forgotten all about it.

Perhaps it’s unfair to level that sort of criticism at TEETH. After all, we need these kind of albums, the quick, trashy adrenaline hits between the more serious, weighty releases on the music calendar. On the other hand, merely filling a hole is not the mark of a classic, and truly great albums don’t need to justify their own existence.

The creators of WHATEVER would likely frown upon such chin-stroking, having made a record that invites the listener to go fucking mental and do little else. There’s not really anything wrong with that. In fact it’s something of a relief to listen to something with no deeper meaning to digest, no heady themes to ponder. Absorb it, enjoy it, consume it hungrily like fast food and alcohol. There’s no need to feel guilty. After all, we all need a cheap rush every now and again.