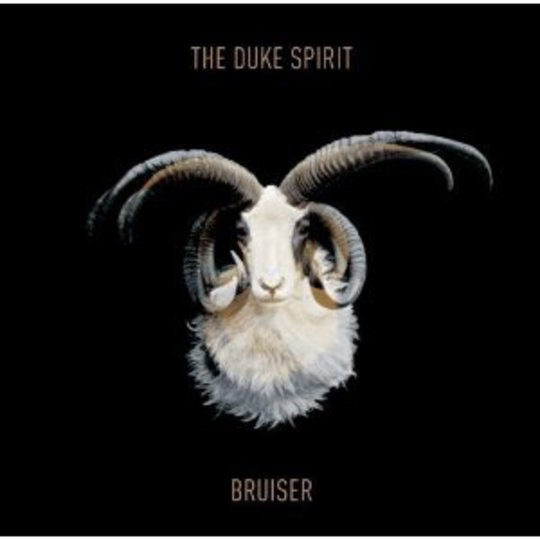 Simple, naked drums fire up through the silence and a rhythm forms. It loops as a crunchy guitar line joins the party and takes you with it. You’re starting to feel it, that desire to drum your toes or bang your steering wheel in time, then Liela Moss’s vocals pour in, like a delicious syrup bringing everything together, tight and thick into some kind of flapjacky goodness. You know you shouldn’t but it tastes too good to resist, and before you know it you’ve ploughed your way through the whole album and devoured the lot. Nom.

‘Cherry Tree’ is the carb-filled opener on the latest offering from The Duke Spirit. It’s an instant grabber with chunky, rolling riffs, perhaps a bit rockier than you might be used to from the band, but still with the sweet harmonies you’ve come to expect. In fact, while it definitely differs from debut Cuts Across The Land and 2008’s Neptune, new album, Bruiser, remains distinctly The Duke Spirit in style and sound.

Stripped back to the bare essentials, this five-piece don’t need to hide behind battlements of techy effects and computerised whizzbangery. They don’t trade in overcomplicating things. As with their previous two albums, songs are played strong and hard but simply, resulting in a record which feels as much a performance in the studio as it would do live.

Track three, ‘Villain’, opens with the haunting melancholy of a solitary piano and Moss’s crystal voice, conjuring cinematic images of a dark and smoky club of old, a single spotlight picking out her face on a lonely stage. Theatrical and elegant, this is the first joltingly different song on the album, but as the wailing guitars sidle in, there are touches of QOTSA and surf noir, swinging and swaying like a distressed damsel atop a windswept outcrop, crying into the crashing seas below. Beautifully sad, yet wonderfully rousing, this has grown to be one of my favourites of the album.

Similarly favoured by me, ‘Surrender’, and later ‘Everybody’s Under Your Spell’, are perfect examples of what The Duke Spirit do best. They hark back to the best tracks of their first album, with all the driven energy of a new band but frantic riffs, throbbing electricity and a belting tune added to the mix. ‘Bodies’ follows with Radiohead-esque guitar progressions and near-Muse moments of electric grandeur, all punctured by the quenching delicacy of a moment’s quiet as Moss sings “You / seem to / Oooh...”.

The mood takes a sombre dip with ‘De Lux’, reminding ancient Placebo fans like me of Molko’s ‘In The Cold Light of Morning’, followed by ‘Sweet Bitter Sweet’ which sails on velvet vocals before building to a bellowing crescendo.

The prize for song most sung has to go to the penultimate track, ‘Northbound’, whose stirring and painfully catchy chorus has a habit of ramping around my head all day. On top of this, being a Bristolian who’s recently acquired a Blackpool-based fella, the words seem strikingly poignant when Moss sings “The fire of love / sends you northbound”. Bloody geography.

Admittedly, I’m a long-standing fan of this band and have a definite girl-crush on Liela Moss but that really hasn’t swung me. It may have been some time coming and it may be a little late for this band in many ways, but Bruiser has managed to take what The Duke Spirit are great at and expand it to create something greater. Mixing classic rampant riffs and exploring newer matured sounds, Moss and co have crafted another hearty album that should satisfy even the hungriest of followers. Ok, it might not be Heston but at the end of the day there’s no denying, everyone enjoys a good gastro-pub.