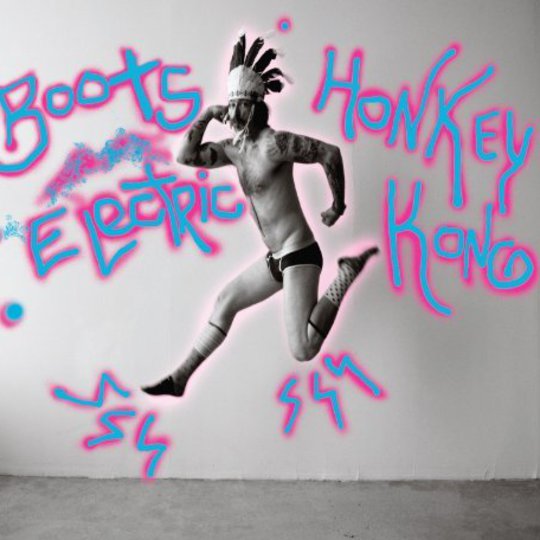 There’s a part of me that sincerely thinks that Boots Electric is the greatest rock star of all time. For the uninitiated (and you guys have really been missing out), Boots Electric, a.k.a. Jesse ‘The Devil’ Hughes, is one sleazily charismatic, wickedly entertaining half of Eagles Of Death Metal – Josh Homme’s ‘other band’. Honkey Kong is Hughes’s first solo effort since EODM’s flamboyantly catchy, lady-killing rock‘n’roll first caught the world’s attention back in 2004. You might remember the lead single from the band’s hilarious 2006 album Death By Sexy, ‘I Want You So Hard (Boy’s Bad News)’. The track boasted cameos from Jack Black and Dave Grohl, but as far as EODM are concerned, Boots Electric has always been the star of the show. Not only has the guy written some damn catchy songs, but he is exhilaratingly confident, pant-wettingly funny and ever so slightly nuts. What more could you want from a rock star?

‘Complexity’ opens Honkey Kong with a patter of electronic drums that echoes LCD Soundsystem at their most frivolous, before squelching pulses of synth and goofy faux-baritone vocals make this one of the dumbest, most fun pop songs you’re ever likely to hear. If David Bowie had spent the early Eighties working with Mr Blobby rather than Nile Rodgers, ‘Let’s Dance’ would have sounded like this. Undoubtedly there’ll be plenty of people who find that this song makes them violently ill, but to anyone with even the slightest sense of humour, it’s clear that ‘Complexity’ is a work of dance-‘til-you-hurl genius.

Elsewhere though, Honkey Kong finds Hughes serenading his lovers with a hell of a lot more sensitivity than he’s shown in the past. The fuzzed-up soul of ‘Dreams Tonight’, for example, finds a troupe of over-dubbed Boots Electric backing singers warn Hughes that his latest love interest “might just break your heart” and that he “might be ripped apart”. Okay, so it’s not exactly Chris de Burgh, but it’s a new dimension to Boots Electric that later leads him to the pained piano balladry of ‘No Fun’.

Boots Electric’s regrets and insecurities are laid most barely on Honkey Kong’s closer, ‘Swallowed By The Night’, a silly country barn dance on which he croons: “I am troubled in the night / By the thought of my own life / And my spirit’s sinking and my faith is thin.” This from a man who’s played ‘ladies only’ shows with Eagles Of Death Metal and once sang “Now look it baby, you're just 19/ I got the flesh and I will make you scream”.

But don’t get the wrong impression, because Honkey Kong isn’t some intimately personal open letter from a wounded soul. That’s not The Devil’s style, and he’s very much up to his old tricks on ‘Speed Demon’, a gut-busting gritty blues jam about driving fast cars and getting laid.

This album is essentially a way for Jesse Hughes to maintain his philandering public persona without getting repetitive. This means some songs are more reflective, and the album as a whole leaves behind straight-forward rock ‘n’ roll in order to explore more diverse genres – from blues and soul to electro and funk. At its core though, Honkey Kong is still the sound of a moustached Californian playboy fooling around in a recording studio. For that reason, you can’t take it too seriously – if you did you’d find an album riddled with clichés and vulgarities. Just take it as it was intended: 30 minutes of fun from one of the world’s most entertaining rock stars.