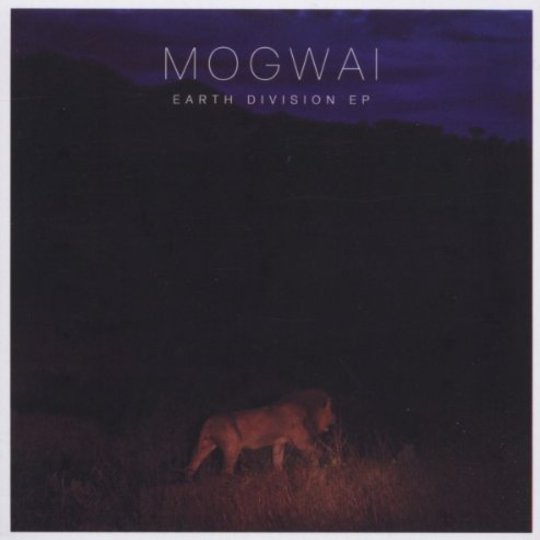 In an interview with DiS published last month, Stuart Braithwaite revealed that the four tracks which make up the latest Mogwai release were recorded in the sessions for the ultra-successful, borderline chart-bothering Hardcore Will Never Die, But You Will. Considering the consistency and quality of that album, it could be assumed that the disparate parts assembled to form Earth Division simply weren’t up to scratch. However, to do so would be to dismiss yet another string to the band’s already considerably well-populated bow.

With a running time of 15 minutes and an almost complete absence of live drums, Earth Division doesn’t need to make any effort in order to differentiate itself from the rest of the Mogwai catalogue; the violins and cellos which weave in and out of proceedings add just enough grandeur without ever sounding jarring or pretentious. While Braithwaite has also stated that the EP’s sound is similar to that of Hardcore’s 23-minute art-installation bonus track ‘Music for a Forgotten Future (The Singing Mountain)’, there are also shades of the band’s soundtrack to Zidane: A 21st Century Portrait; the use of orchestral strings in rock music often implies a cinematic undertone but it is rare for it to be quite so seamlessly integrated as on Earth Division.

While the EP’s instrumentation may imply a consistent theme, each of its four compositions maintains a distinct identity separate from its cohesive whole. ‘Drunk and Crazy’ is, as one might expect, the noisiest track on offer, and also the closest to a full band experience as colossal shoegazed waves of sound meet synthesized beats before surrendering to a gorgeously subdued string passage. Conversely, ‘Get to France’ is amongst the most unsettling, downright eerie Mogwai compositions in recent years, while fans of the band’s signature fragile vocals will be quietly content with the inclusion of ‘Hound of Winter’, replete with acoustic (!) guitar and even the odd dab of harmonica.

It is, however, closing track ‘Does This Always Happen?’ which provides the culmination of Earth Division’s orchestral efforts; its cyclical, never-quite-resolving, finger-plucked chord progression makes for a tense conclusion to an ambitious and career-affirming release. Rather than functioning as simple b-side fodder, the four tracks which shape Earth Division are all totally different, yet just as essential as the album from which they were excluded. Based on this evidence, should Mogwai ever choose to release a full-length acoustic(ish) album, it certainly wouldn’t be the worst decision they’ve ever made.