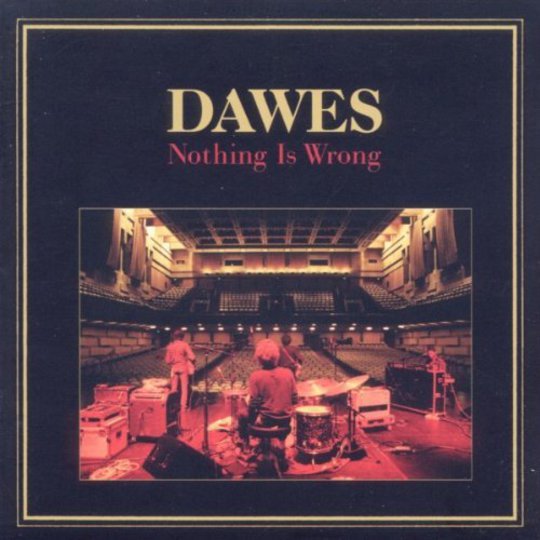 True to its name, there's nothing particularly wrong with Laurel Canyon quartet Dawes' second album. The foursome thread enough Neil Young-isms into their songs to fill a thousands Harvests, the 11 tracks here spilling over with bluesy piano bursts and sumptuous vocal harmonies, a crunchy thrum of electric guitar ever-present. No, nothing is amiss or even slightly askew about the Californian group's return – and perhaps that's the problem. Nothing Is Wrong is an album that paws so affectionately at the Americana idols that inspired it that you glean nothing of the band that penned it.

Opener 'Time Spent In Los Angeles' begins the record in promising fashion – a poppy slice of breezy indie rock, pausing on frontman Taylor Goldsmith's enduring restlessness. Organs stalk the backdrop, bass guitar snaking crisply around the skeleton of the song, while Goldsmith laments that “these days my friends don't seem to know me / without a suitcase in my hand.”

Unfortunately, as the rest of the record unfolds, the group rarely travel beyond this sort of So-Cal college rock, sepia-hued and swimming in vague allusions to heartbreak. There are only slight variations: doffing a cap to Conor Oberst on the grittier 'Fire Away,' turning to piano on closing ballad 'A Little Bit Of Everything' to exorcise their affections for Jimmy Webb. You can practically taste the moonshine as Goldsmith spits his tales of stunted romance in the great American outdoors over the rootsy-folk backdrops his bandmates provide. Homage is all very well, but where is the character, the colour, the insight here?

There have, of course, been bands who have successfully harked back decades in their sonic stylings – Midlake, for instance, pry open not-dissimilar vaults from musical history on 2006's monumental Trials of Van Occupanther album, and more recently Fleet Foxes have been winning over audiences and critics alike with their Sixties folk-rock revivalist shtick. But, where Helplessness Blues, for all its overblown baroque silliness, leaves you with a firm, disarming impression of Robin Pecknold, Dawes find themselves unable to shoehorn a bit of themselves into Nothing Is Wrong amid all the well-placed nods and winks.

If Dawes appear a little eager to pay homage to their heroes, perhaps it's because they have spent a lot of time in the company of them – since their 2008 debut, the group have been recruited to serve as backing band to US AOR-rock royalty Robbie Robertson (once of The Band, don't you know) and Jackson Browne, who returns the favour in a way, guesting on backing vocals on various tracks here. These stints may have sharpened their prowess as a tight, Americana-bleating music machine – guitar licks fizz with distorted accomplishment and their close vocal harmonies are unwavering, no less than on upbeat country swagger number 'So Well' – but the lingering suspicion is that Nothing Is Wrong would have been a better record had that time been spent eking the emotion out of their own lives, rather than their record collections.