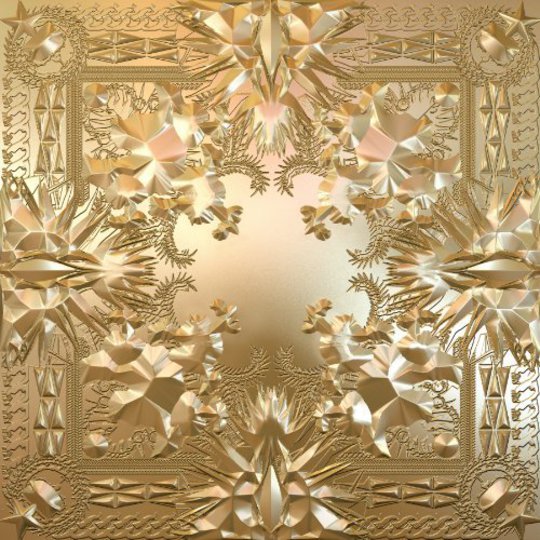 Misery loves company, so it was perhaps inevitable that Kanye West would follow his woe-is-me set of 2010, My Beautiful Dark Twisted Fantasy, with a collaborative affair that welcomes not only co-headliner Jay-Z but also Beyoncé, Odd Future affiliate Frank Ocean, Bon Iver’s Justin Vernon, The-Dream, Mr Hudson (remember him?), La Roux’s Elly Jackson, Kid Cudi, Swizz Beatz, the RZA and Q-Tip across production and performance roles. And that’s just scratching the surface of the personnel involved – also along for a most enjoyable ride are the ghosts of Otis Redding, Nina Simone and Curtis Mayfield via samples, and several tracks borrow elements from James Brown numbers. Clearly classics within the pair’s record collections were freshly raided – some change from the King Crimson and Aphex Twin lifts on Kanye’s last LP.

If that sounds like a case of way too many cooks, rein in your expectations for a messy, unfocussed collection, as Watch the Throne frequently surprises with its potency and relative compositional providence. It’s not an album that needed to happen, but millionaires have a habit of fraternising with their own, as any cursory look at the love lives of Hollywood’s elite will prove. And with so many of those unions ending in separation, who can predict how much life this hook-up between two of rap’s biggest stars has in it? There’s a tour booked for the end of 2011, so they’re at least taking Watch the Throne seriously enough to wheel these cuts around their home country (UK dates, pleeease?). Truth be told, though, if this is the only studio release to emerge from the partnership, it’s enough to justify the many dollars spent and air miles accumulated.

What could have been pure indulgence repeatedly surprises with its lean physique and palpable hunger. Despite the vast array of producers aboard, and myriad recording locations – France, England, Australia, the United Arab Emirates – Watch the Throne flows from cut to cut with commendable slickness (although some may bemoan a shortage of conspicuous compositional variety). Despite neither key rapper having anything to prove, both go at their verses with great gusto; and thematically they’re not simply dropping whatever pops into their heads. True, Kanye is still fairly preoccupied with his penis and what/who he can put it in – but there are snatches of social commentary and political rhetoric, predominantly from Jay-Z but far from restricted to the words of the older artist (he’s 41, Kanye 34). So while one’s jaw does drop at some points – Jay-Z: “I got that hot bitch in my home.” / Kanye: “You know how many hot bitches I own?” (‘Nggas in Paris’); Kanye’s dick-swinging swagger on ‘That’s My Btch’ – it’s picked up again by astute and timely observations on other tracks. Issues of racism and poverty may not affect these artists today, but Jay-Z’s tough childhood places him in a position where his aggressive lyrical stance on ‘H-A-M’ – “Fuck you mad at me for? / Y’all don’t even know what I’ve been through” – has been hard-earned. And though his boasts might irk some listeners – “N*ggas ain’t got my lady’s money,” he sneers, taking aim at would-be peers – nobody can accuse him of lacking the sufficient resources to support his proclamations.

A few lazy tracks are non-events compared to what surrounds them. Single ‘Otis’, sampling the late singer’s cover of ‘Try a Little Tenderness’, runs around in circles for three minutes without leaving an impression; and the assimilation of Nina Simone’s ‘Feeling Good’ on ‘New Day’ sees the preacher’s daughter from North Carolina dominating the mix from beyond the grave, to the detriment of the end product. It’s far from one of the RZA’s finest. But when Watch the Throne truly sings, it’s utterly compelling. ‘Lift Off’, featuring Beyoncé, is the next-scheduled single, and rightly so. It’s this album’s ‘All of the Lights’, minus that number’s over-subscribed guest list; a brilliantly breathless exposition on the players’ position in the industry – “How many people you know can take it this far?” asks Queen Bee, on the kind of form she must wish she found on her own album of this year, the disappointingly sedate 4 – which manages to combine braggadocio with bashfulness in a way that should (in an ideal world) see it top many a chart worldwide. And Mr Hudson is a revelation on the chorus to ‘Why I Love You’, which comes on like a hip-hop Chase & Status if, y’know, they were any good. Who knew, eh?

Those with finely tuned listening gear will be able to pick out problems with the mix here – it’s inconsistent, perhaps in keeping with a record that was stitched together in such piecemeal fashion (and which began life as an EP). But hearing a commercial heavyweight like Jay-Z rapping with all his heart, auto-tune as alien a concept as inventiveness at Syco, is truly refreshing in a climate where mainstream rappers persist with past-it clichés and misplaced bravado. The faults, if you must, actually lend Watch the Throne a more organic quality than what was evident on either …Dark Twisted Fantasy or The Blueprint 3, and that human touch, that first-take imperfection, proves to be an endearing quality. It’s no Pitchfork 9.5, which many a DiS reader may have anticipated prior to its release, but this is an excellent record which cherry-picks from the catalogues of its pivotal architects and encompasses constituents from across the genre spectrum to scintillating effect. Haters are gonna hate given the artists in question – but to be disappointed with Watch the Throne is to be disappointed with the rap game in 2011.